The US Navy Is Honoring Gay Rights Activist Harvey Milk 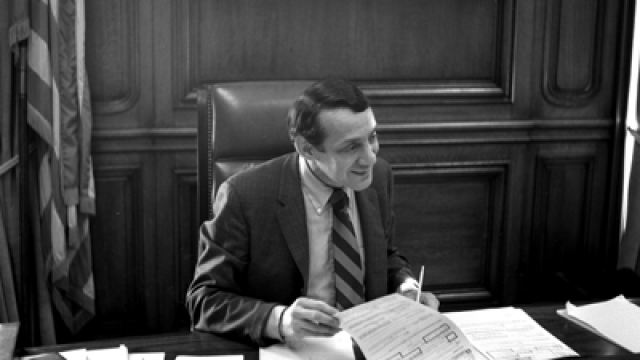 The U.S. Navy is naming a ship after gay rights activist Harvey Milk.

"I'm going to call upon the gay community to come out now, keep the education going, keep talking one-to-one," Milk said at a rally in 1978.

Before Milk became the first openly gay elected official to serve in a major U.S. city, he served in the Navy. So did both his mother and father. Milk was assassinated in 1978, months after his inauguration to San Francisco's Board of Supervisors.

Media outlets have noted that naming a fleet oiler after a gay icon marks a big change in attitudes toward LGBTQ people in the military. Until 2011, the military barred openly gay individuals from serving.

Within the past 10 years, Milk's legacy has gotten some significant attention. In 2008, his life was the center of the movie "Milk," in which he was played by Sean Penn.

The year after that, President Obama honored Milk posthumously with a Medal of Freedom. And in 2014, he was the face of a postage stamp.

The commemorative stamp was released in partnership with the Harvey Milk Foundation, co-founded by Stuart Milk, the nephew of the activist. Stuart Milk recently condemned violence against LGBTQ people after the Orlando shooting.

This video includes an image from Daniel Nicoletta / CC BY SA 3.0 and U.S. Navy and clips from YouTube / vibrantvision2020, ABC, NBC, Focus Features / "Milk" and The White House.