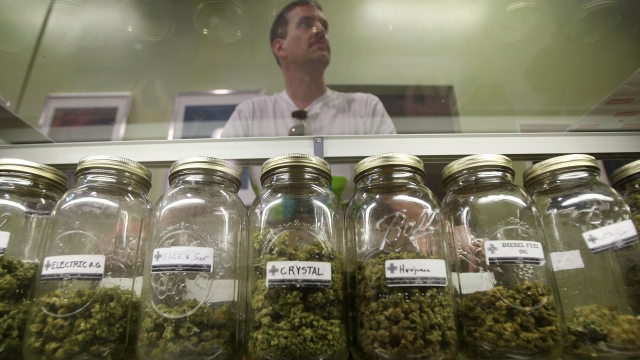 SMS
The US Could Make Billions From Pot If It Follows Colorado's Lead
By Grant Suneson
By Grant Suneson
May 19, 2016
A Colorado town is using tax money from marijuana to help the homeless. A new study says the rest of the U.S. could also benefit from pot tax revenue.
SHOW TRANSCRIPT

There's a stereotype that stoners don't do anything, but marijuana users are actually doing quite a bit to help the homeless in one Colorado town.

The city of Aurora will fight homelessness using $1.5 million in pot funds in the city’s 2017 and 2018 budgets. The money will fund educational programs and vans to be used for mobile outreach to the homeless.

Weed sales in Aurora this year are expected to more than double from 2015. City officials are hopeful the pot money can also finance city nonprofits, road improvements and a new recreation center.

With all the marijuana money set to improve Aurora, it raises the question: How much could the U.S. as a whole benefit if it legalized and taxed marijuana nationwide?

The independent research organization Tax Foundation crunched the numbers and found "a mature marijuana industry could generate up to $28 billion in tax revenues for federal, state, and local governments."

To put that in perspective, NASA’s entire 2016 budget was only $18 billion.

Legal marijuana quickly outpaced revenue estimates in Colorado, and the study says other states would benefit similarly — from not only sales tax on the pot, but income and payroll taxes from the marijuana industry.

In addition to all the new tax revenue, a study from Harvard researchers estimates the government would save around $8.7 billion that it spends enforcing the federal prohibition of marijuana.

This video includes clips from Vice, WCPO and NASA, images from Getty Images and music provided courtesy of APM music.