The Unsung Heroes Of Comic-Con 2015 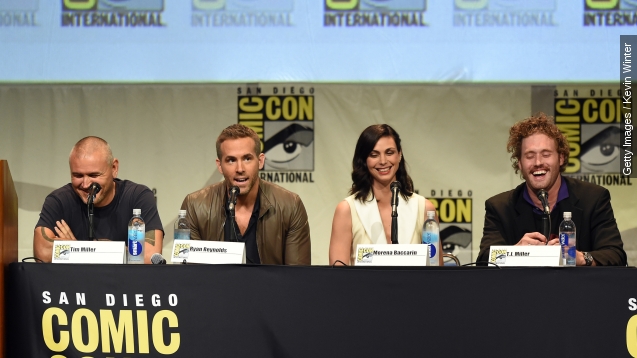 Unless you live under a rock, you've likely heard about the new "Star Wars" footage, "Batman v Superman" trailer or the newest "Hunger Games" teaser that came out of Comic-Con this weekend.

And yes, those got huge amounts of press, tons of reactions on social media and plenty of hype — but there were a few other movies that became immediate hits at the iconic Hall H.

"It's only been 11 years in the waiting," Ryan Reynolds said.

Most notably, "Deadpool." The trailer left fans chanting so loudly it was played a second time.

"Tim Miller and I, the director, we just sat back there and just shook our heads kind of in awe," Reynolds told panel moderator Chris Hardwick after the trailer aired.

Does that sound familiar? It should.

The same thing happened when the "300" trailer premiered at Comic-Con in 2007. Fans were so happy about how both "300" and "Deadpool" trailers mirrored their graphic novel counterparts, they wanted an encore.

Also a huge success in Hall H was Quentin Tarantino's "The Hateful Eight" panel, where the director showed seven minutes of film footage and announced Ennio Morricone would score the film.

Morricone is known for his work on "Django Unchained," "The Untouchables" and "Inglourious Basterds."

Del Toro gushed about his cast, saying it's the best he's ever worked with: "That's my special effects in this movie — those actors."

And he won total approval  — from at least the women in the audience  — when he said he wanted a strong lead actress. (Video via Universal Pictures)

"What I wanted was the freedom to tackle a great adult story for a female lead," he said.

The legendary director even went off book, asking the audience to show their interest in a "Hellboy 3" film because executives from Universal and Legendary were "listening" backstage.

This video includes images from Getty Images and music by @nop / CC by 2.5.