The Universe Could Be Full Of Tatooine Sunsets 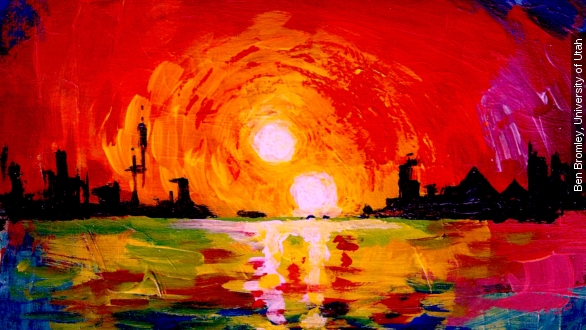 In another case of science following science fiction, it's looking more and more like George Lucas got it right when he envisioned a planet with two suns.

Every "Star Wars" fan knows the scene we're talking about: a teenage Luke Skywalker watching dual suns set from his uncle's farm on Tatooine. It's pretty much the most iconic scene in the whole franchise.

Nearly four decades later, astronomers still haven't found a planet quite like Tatooine. But a new study says it's only a matter of time.

The study has to do with planet formation, the process where dust and gas surrounding a newly formed star clump together into a planet. For years, it's been an open question whether that process could work the same way in binary star systems.

In 2006, astronomer Alan Boss at the Carnegie Institute showed that the process could work for large gaseous planets like Neptune or Jupiter, and five years later, NASA announced just such a planet had been found.

Since then, around a dozen other planets have been discovered orbiting binary stars, but all of them are gas giants.

So what about small, rocky planets like Earth or Tatooine? According to astrophysicists at the University of Utah, they're out there, too, even if we haven't found them yet.

In a new paper that hasn't yet been peer reviewed, the study's authors say they ran simulation after simulation, and eventually found that "planet formation can proceed in much the same way as around a single star."

In fact, because around half of all star systems have two stars, they say, "Tatooine sunsets may be common after all," including in the habitable zone, the distance from the star where life can flourish.

Part of the reason we might not have found them yet is that small rocky planets are just tougher to find. Luckily, NASA has a new space telescope dedicated to the planet search set for launch in 2017.

This video includes images from NASA and Ben Bromley, University of Utah.