The United States And 'Sovereign Citizens' 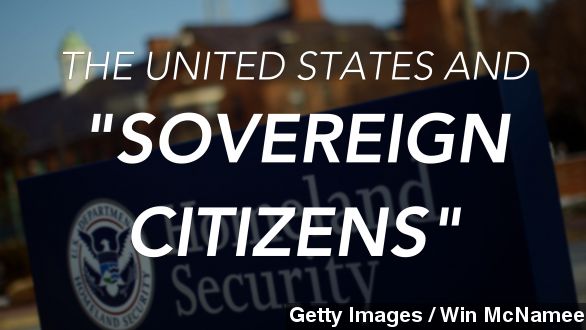 The United States and "sovereign citizens."

The Department of Homeland Security is circulating a new report with a focus on domestic threats from "right-wing sovereign citizen extremists."

That’s according to CNN, who says they've reviewed a copy of the report.

"These are people around the country who believe the federal government and even state government doesn't have any authority over them," a CNN reporter noted.

While the term “sovereign citizens” may sound unfamiliar, this is far from the first time the designation has made the news. Just in the past few months, there’s been a case where a Missouri woman tried to claim someone’s multi-million dollar home.

“Police said 28-year-old Lakresha Slaughter of North St. Louis identified herself as a ‘sovereign citizen.’ … Police said the suspect believed the home was unoccupied and wanted to move in, but it was occupied.”

An Ohio man stashed pipe bombs in his mailbox.

“That’s when police found pipe bombs in the home of Mike Kewlis, he considered himself a sovereign citizen.”

And a Florida man was killed after opening fire on police officers in a parking lot.

"Well that man's name has not been released, but he has identified as a sovereign citizen meaning he did not recognize the legitimacy of the U.S. government."

By claiming the government doesn’t have authority over them, sovereign citizens essentially think they can get away with anything from not paying taxes to illegally claiming they own property they don’t actually own. But they can be much more a problem, enough to warrant multiple reports from the U.S. government.

Other than this most recent report from CNN, another Department of Homeland Security-affiliated report was released in 2014.

The report included a survey of law enforcement officers, which ranked sovereign citizens more of a threat than even potential jihadists or militias.

Another report was published in 2009 by the FBI and the Extremism and Radicalization Branch. It also evaluated the risks of growing right-wing extremism.

But not everyone necessarily thinks sovereign citizens are an issue, or even right-wing for that matter. Here’s Fox Business commentator Lou Dobbs on this most recent report.

"More nonsense, more drivel. … For my part, I'd consider them to be more properly just anarchists."

Some have also pointed out that during a summit on countering extremism this week, President Obama made no mention of sovereign citizens but instead focused completely on foreign threats such as ISIS.

In his defense, a White House official told CNN that the president did mention "violent ideologies" of all types during the summit, which would include sovereign citizens.

The Southern Poverty Law Center estimates there are around 100,000 "hard-core" sovereign citizen believers with another 200,000 who dabble in the ideology living in the U.S.