The UK Mimics US Drone Policy With Sights On Syria 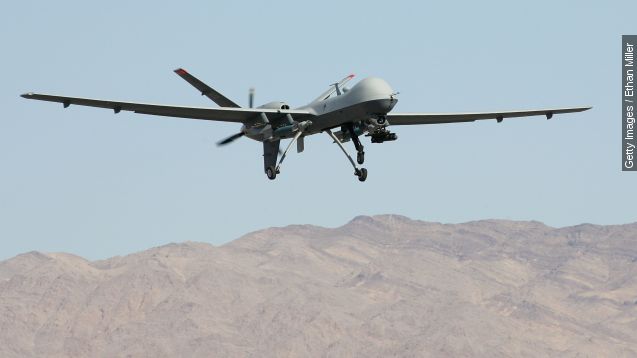 SMS
The UK Mimics US Drone Policy With Sights On Syria
By Steven Sparkman
By Steven Sparkman
September 7, 2015
David Cameron announced the RAF carried out a drone strike against a U.K. citizen in Syria, showing a sudden, rapid shift toward targeted killings.
SHOW TRANSCRIPT

U.K. Prime Minister David Cameron's statement to Parliament on Monday dropped a lot of new revelations about the country's fight against ISIS.

"Today, I can inform the House that in an act of self-defense and after meticulous planning, Reyaad Khan was killed in a precision airstrike carried out on the 21st of August by an RAF remotely piloted aircraft while he was traveling in a vehicle in the area of Raqqa in Syria," Cameron said.

From that statement, we learned several things we didn't know before: The U.K. has worked out a legal process of targeting individuals, including its own citizens, for assassination using drones; it's already carried out such a killing; and it's conducting military operations in Syria.

That's quite a bit to take in, and it raises all kinds of legal questions about the U.K.'s counterterrorism efforts.

Over the last few years, we've almost gotten used to hearing about the U.S. carrying out drone strikes against U.S. citizens.

"Earlier this morning, Anwar al-Awlaki, the leader of Al-Qaeda in the Arabian Peninsula, was killed in Yemen," President Obama said in 2011.

But this is the first time the U.K. government has openly acknowledged doing the same, and Cameron's rhetoric matches President Obama's pretty closely on the topic. (Video via Channel 4)

"There was no alternative. In this area, there's no government we could work with," Cameron said Monday.

"When there are no other governments capable of effectively addressing the threat ...," Obama said in 2013.

"We have no military on the ground to detain those preparing plots," Cameron said.

"Our preference is always to detain, interrogate and prosecute," Obama said.

The switch to what The Guardian called "the U.S. model of drone strikes" is a significant change for the U.K.

"We have never used drones before, at least acknowledged, in the role of assassination. ... We've never used them, we've always said we didn't use them in the way the CIA always used them or often used them: to assassinate our enemies," Michael Clarke of the defense think tank Royal United Services Institute said.

It's sure to be a controversial decision — at least when it comes to killing British citizens — just as similar strikes are controversial in the U.S. And then there's the issue of this strike taking place in Syria.

A statement from the Scottish National Party accused Cameron of trying to pry open the door for more airstrikes in Syria. Parliament blocked a move to authorize strikes there in 2013, but Cameron has said he believes he could still order them under certain circumstances. (Video via Al Jazeera)

"I think it's important to reserve the right that, if there was a critical British national interest at stake or if there was the need to act to prevent a humanitarian catastrophe, then you could act immediately and explain to the House of Commons afterward," Cameron said in September 2014.

What's more, Cameron's government is expected to introduce another bill authorizing strikes sometime this fall, and his secretary of state, George Osborne, made it clear how the government wants the vote to go.

"If you're tackling ISIS on one side of the Iraqi border, you should be tackling it on the other side in Syria," he said.

The government's argument is that, in order to stem the flow of refugees from Syria, the U.K. should be willing to intervene in Syria itself. To drive his point home, Cameron announced Monday the U.K. would accept another 20,000 Syrian refugees.