The Ugly Side Of Spain's Iconic Running Of The Bulls 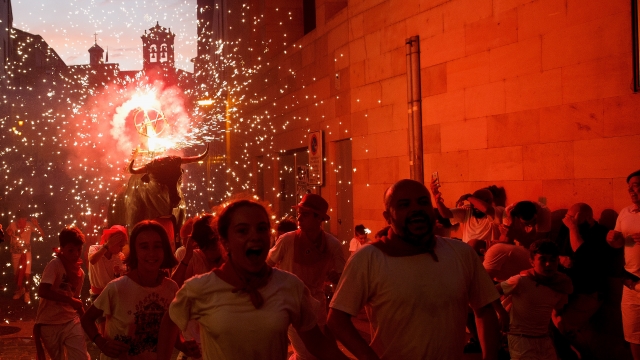 SMS
The Ugly Side Of Spain's Iconic Running Of The Bulls
By Melissa Prax
By Melissa Prax
July 8, 2016
The Running of the Bulls in Pamplona, Spain, is a tradition, but there's a dark side for animals.
SHOW TRANSCRIPT

The Running of the Bulls almost guarantees the animals' death.

"Behind the festivities, there is a darker side involving hideous animal cruelty," an activist for League Against Cruel Sports said.

But while protesters continue trying to draw attention to the bullfights that kill the animals after the race, mainstream media generally only shows images of the excitement and people running in the streets.

Humane Society International says about 250,000 bulls are killed every year in bullfights. That's in Spain and the seven other countries where the fighting is still held.

SEE MORE: These Freed Zoo Animals Are On To Bigger, Better Things

Naked protesters and critically hurt people didn't stop this year's running of the bulls in Pamplona — arguably the world's most well-known bull run.

Part of that fame came from Ernest Hemingway's novel "The Sun Also Rises."

It's not just bulls who've been killed. At least 16 people have died in the run since 1910.

At least three Americans were among those injured this year.

The Running of the Bulls is part of the larger San Fermín festival that runs more than a week. The festival's namesake is meant to honor the Catholic saint.

Pamplona's bull run is rooted in tradition and thrill — which is why it pulls in plenty of tourists and likely won't end anytime soon.

This video includes images from Getty Images and clips from EITB, Sanfermin.com, NacioDigital, RTVE, League Against Cruel Sports and People for the Ethical Treatment of Animals. Music provided courtesy of APM Music.