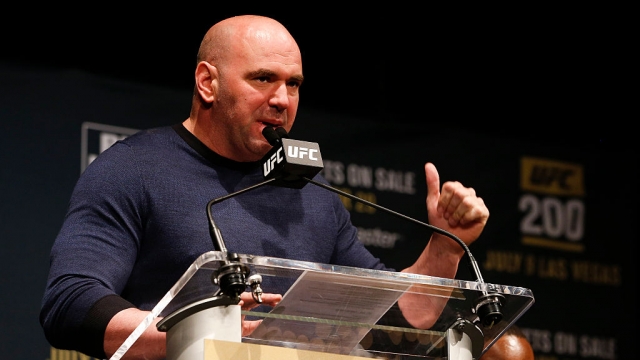 SMS
The UFC Once Sold For $2 Million; Now, It's Selling For $4.2 Billion
By Grant Suneson
By Grant Suneson
June 20, 2016
Reports indicate that the UFC has been sold for an estimated $4.2 billion. President Dana White is expected to stay with the company.
SHOW TRANSCRIPT

UFC, the world’s largest mixed martial arts organization, has reportedly been sold for more than $4 billion.

UFC president Dana White had recently denied that the fighting league was for sale but later said on "The Dan Patrick Show" that might be negotiable.

"I've been saying since this thing came out, 'No, we're not for sale.' But let me tell you, what if someone shows up with $4 billion? We can talk," White told Dan Patrick.

According to FloSports, which broke the news, the winning bid of $4.2 billion came from a group made up of talent agency WME-IMG, The Kraft Group and two Chinese companies.

The previous owners, Zuffa, LLC, purchased the UFC in 2001 for just $2 million. Since then, the league has turned into a massive success, making an estimated $600 million in revenue in 2015.

The new owners will likely try to continue that success and take a hands-off approach with the UFC. White is expected to remain in charge of the operation.

This video includes clips from NBC Sports and EA Sports and images from Getty Images.