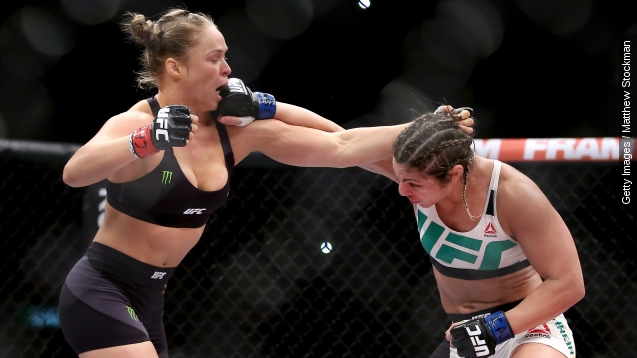 The Ultimate Fighting Championship is the largest professional mixed martial arts organization in the world, and Monday it announced an April event at Madison Square Garden.

But there’s just one problem. MMA events are illegal in the state of New York, and the UFC is again going to court to try to lift the ban.

The Empire State is the only state in the U.S. to outlaw regulated MMA fights. The UFC’s parent company is suing New York, claiming the 1996 law is unfairly vague. (Video via SB Nation)

The UFC has been pushing for legalization in New York for years now, and this makes sense given the company’s lofty aspirations.

UFC president Dana White has made it clear he wants his sport to spread to every country in the world. (Video via SportsNet Canada)

“The one thing that I believe would work everywhere is fighting,” White said during a Q&A at Stanford University in 2013. “Because it doesn’t matter what color you are, what country you come from from or what language you speak. We’re all human beings and fighting’s in our DNA, man. We get it and we like it.”

Bills legalizing mixed martial arts in New York have passed in the state Senate seven times in the past six years, but have struggled year after year to get put up for a vote by the assembly. UFC proponents claim corruption is to blame.

White was pretty miffed after the latest bid for legal MMA failed without a vote in the assembly this past June, attacking the state government over Twitter.

The organization sued the state before, in 2011, though the lawsuit was eventually dismissed. And it's reserved a date at MSG before too, for December of this year, though the setback in June snuffed that out.

UFC acknowledges the April date at the Garden may suffer the same cancellation fate, but White believes coming to New York is the organization's destiny, which is why he's taken the "ground and pound" approach.