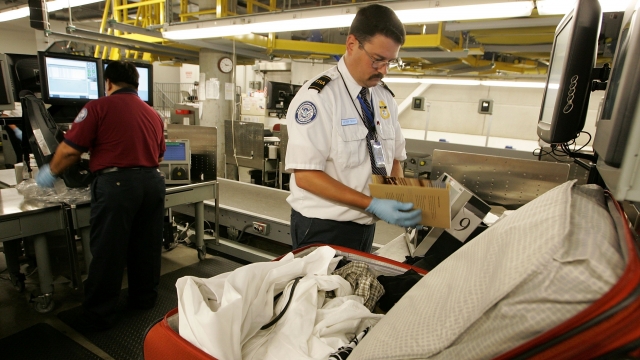 SMS
The TSA Found A Record 73 Guns In Carry-Ons In A Week
By Grant Suneson
By Grant Suneson
April 24, 2016
A record-breaking 73 guns were found in carry-on luggage at airports April 15-21. The TSA urged passengers to double-check their bags before flying.
SHOW TRANSCRIPT

When you're preparing for a flight, it's important to pack everything you'll need for your trip. Also important, though, is making sure you don't have a weapon in your carry-on.

Some people apparently forgot that rule. The Transportation Security Administration said it found 73 firearms in carry-on luggage last week. That's more than any other one-week stretch in TSA history.

Not only that, but nearly all the guns were loaded, and 27 had a round chambered. And that may not even be close to the actual number of guns that made it onto planes.

Last year, the Department of Homeland Security tested the TSA on its ability to find prohibited items, and it was startlingly ineffective.

Undercover agents were regularly able to smuggle mock weapons and explosives past TSA screeners at airports across the country. Out of 70 potential threats, screeners only found three. That's a more than 95 percent failure rate.

The TSA said people often forget guns in their luggage but added you can still fly with a gun as long as it's in your checked baggage and you clear it with the airline.