The Trouble With Banning Pit Bulls 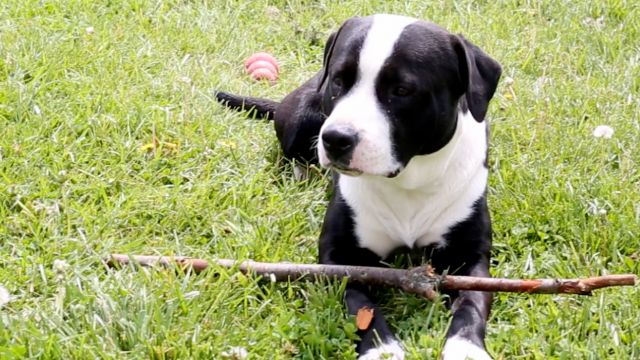 "Pit bulls. I think there are kind of two sides of it. There's people who either don't really like pit bulls or people who really do like pit bulls. ... Just seeing a pit bull behind a glass cage sometimes people will back away and say, 'Oh my gosh. There's a pit bull. Let's walk by that,'" said Michelle Casey, assistant director of the Central Missouri Humane Society.

This is Michelle Casey, assistant director of the Central Missouri Humane Society in Columbia.

Right now, state legislators in Missouri are considering stripping cities of the power to impose "breed specific" dog bans, which usually have the biggest impact on pit bulls.

"People think of a pit bull, and they think of a really big, muscular, big-headed, really strong type of breed," Casey says. "But really, pit bulls genetically are supposed to be about 40 to 50 pounds. They're thinner, they're agile, they curl into little balls. We've kind of overbred them to become this kind of beast-like dog, and that is not at all what they're supposed to be in any way."

While Columbia, Missouri, doesn't have a citywide ban on pit bulls, dozens of neighborhoods within the city and a handful of surrounding cities do.

"Sometimes, we've got people who surrender their pit bulls because they have to move and can't find a place that will accept them," Casey says. "If we're at capacity and we have about 50 dogs on the adoption floor, ... we've had upwards of 30 to 40 percent of them being pit bulls."

The bans on breed-specific dogs is a national issue. And no matter the state, city or neighborhood, definitive and credible breed-specific statistics are tough to come by.

The National Canine Research Council says there is "no credible evidence" that certain breeds are more aggressive than others, and the American Veterinary Medical Association says controlled studies "have not identified [pit bulls] as disproportionately dangerous."

But according to DogsBite.org, a national dog bite victims' group, pit bulls contributed to 82 percent of the 34 dog-related deaths it recorded in 2015.

"In my experience, they are no more likely to bite than a chihuahua or a rat terrier is," Casey says. "Not once since I've been here have I ever been afraid of a pit bull or felt fearful of a pit bull at all. They're such loyal dogs; they want to please their people so much, so really bad people can train really good dogs to do bad things."

This video includes clips from WKEF, KGTV, WTVT and WCPO.