The Trix Rabbit Is Going From Cartoon To Real Life 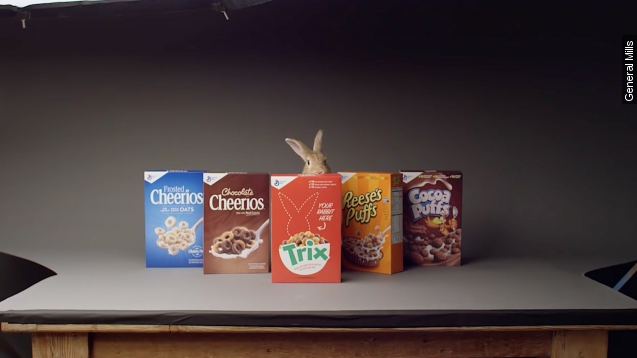 "Silly Rabbit, Trix are for kids!" said kids in a Trix commercial.

That animated white rabbit we know and love from Trix cereal is about to get a real-life makeover.

"Trix rabbit audition. And action. Nice!" someone said in the General Mills ad.

Yeah, it's a marketing ploy to "celebrate" that General Mills cereals will no longer have flavors and colors from artificial sources. Instead, the company's going to use fruit and vegetable juice, and some other natural flavors, like vanilla.

"To celebrate, we're making one real rabbit the honorary face of Trix," a woman said in the ad.

It's a gimmick that might be working. Search #RealTrixRabbit in Twitter, and your feed will be filled with rabbit photos.

And speaking of rabbits — fun fact. That silly rabbit, who's always trying to get a bite of his coveted cereal, has succeeded twice. Once in 1976 and once in 1980. Maybe the real rabbit will have better luck.

"Orange, orange. Oh joy!" said the rabbit in a commercial.