The Top Seeds In March Madness Have Been Named, And There's A Surprise 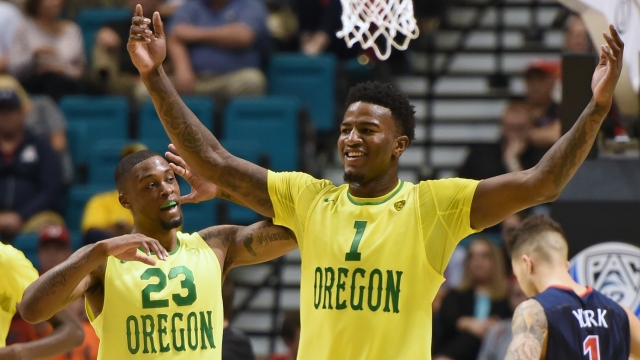 The March Madness selection committee didn't wait around to make its first controversial decision of Selection Sunday. The four No. 1 seeds in the tournament are Kansas, North Carolina, Virginia and ... Oregon.

Oregon is the big surprise to college basketball fans, many of whom penciled in Michigan State as a No. 1. The Spartans had a 28-5 record and won the Big Ten Conference tournament just hours before the bracket was released.

But Oregon was bolstered by a 14-4 Pac-12 campaign and the second-toughest schedule in the country. Michigan State's schedule ranked 79th.

Being a No. 1 seed in March Madness is about more than just bragging rights. A top seed has never lost its first round matchup, largely because the No. 1 seeds play some of the worst teams in the Big Dance.

And in the 31 years the tournament has been seeded this way, a No. 1 seed has been nearly twice as likely to make the Final Four as a No. 2.

Of the four No. 1 seeds, the committee chose Kansas as the overall top team, meaning in the committee's eyes, they're the best team in the country.

On the whole though, the four No. 1 seeds aren't as strong as we're used to seeing. The four teams have the most combined regular season losses in the history of March Madness.

This video includes clips from Oregon Athletics and images from Getty Images.