The Top 5 Most Anticipated Movies Of 2015 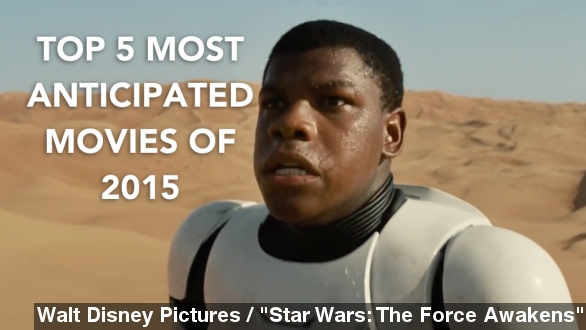 SMS
The Top 5 Most Anticipated Movies Of 2015

By Jamal Andress
January 11, 2015
Now that 2014 has ended, we movie-lovers turn our attention to the new year and the top 5 most anticipated movies of 2015.
SHOW TRANSCRIPT

But if everything goes as planned 2015 will offer even more — and better — blockbusters. So, we’re counting down the five most anticipated movies of the year. (Video via Universal Pictures / "Fifty Shades of Grey")

History has taught us: if the the book does well, the movie is on the way.

George Takei and Gilbert Gottfried have both given dramatic readings.

“... over my stomach between my thighs with his long-fingered hands. Oh my!”

“Not taking his eyes off mine he scrunches my panties in his hand.”

And Ellen DeGeneres took a paddle for a test drive. “I like it?”

And there was perhaps no book in 2012 that was begging for a silver screen adaptation quite like “Fifty Shades of Grey.”

With devoted moms all over the world waiting to see Christian Grey come to life, Jamie Dornan has a lot to live up to this Valentine’s Day.

In what is surely the mad dog among 2015 trailers, George Miller takes us back to the post apocalyptic world he created more than 30 years ago. (Video via Warner Bros. / "Mad Max: Fury Road")

And he does it with the help of Tom Hardy, who has been on a roll these past two years with movies like “The Dark Knight Rises” and “Locke.”

When the trailer was first shown at Comic-Con and then later released online there was no shortage of fanfare, like this little nugget from Wired: “The new Tom Hardy edition of Earth-gone-wrong wants to double down, take eight shots of Absinthe, and inhale a dozen rails of meth before plunging an adrenaline needle into its own heart.”

At number three producer Steven Spielberg shows us bringing dinosaurs back to life is just as bad an idea now as it was the first three times.

After one game-changing, legendary original and two unfortunate sequels we’d rather just forget – this summer, “Jurassic World” rolls out with Chris Pratt in yet another high-profile leading role. (Video via NBC / "Late Night with Seth Meyers")

A trailer for the fourth film in the franchise definitely pokes all the nostalgia buttons necessary but has the added bonus of genetically engineered hybrid dinosaurs.

Here’s a sneak peek of how that’s gonna go.

And the second most anticipated movie of 2015 stars Pinocchio!

“The Avengers” franchise started in May 2012 and was an instant success.

Never have we seen multiple blockbuster movie stars all with their own super successful franchises combine to take on one movie.

As for the box office, “The Avengers” had the most successful domestic opening weekend of all time bringing in an astounding $207 million. (Video via Walt Disney Pictures / "The Avengers")

The closest competitor? $169 million from “Harry Potter and the Deathly Hallows: Part 2.”

And finally, the most anticipated movie of 2015. It’s not very suspenseful. You knew, right? I mean, we all knew.

Since the trailer was released in November, Star Wars fans and critics alike have been, well, let’s say beside themselves. (Video via YouTube / Jeremy Jahns, YouTube / ScreenTeamPlus, YouTube / Chris Stuckman.

“Star Wars: The Force Awakens” is the much-anticipated long-awaited sequel to “Return of the Jedi.” The movie takes place about thirty years afterward.

And for the first time the man responsible for the Star Wars phenomenon is not really involved. (Video via American Film Institute)

Walt Disney Studios has handed the reins over to J.J. Abrams, the director behind the Star Trek reboot. (Video via YouTube / Star Wars)

And we know “The Force Awakens” will include members of the original cast — Carrie Fisher as Princess Leia, Harrison Ford as Han Solo and Mark Hamill as Luke Skywalker.

So there you have it: the most anticipated movies of 2015. Check back each week for Newsy’s Box Office Top 3.