The Third Democratic Debate, In Under Two Minutes 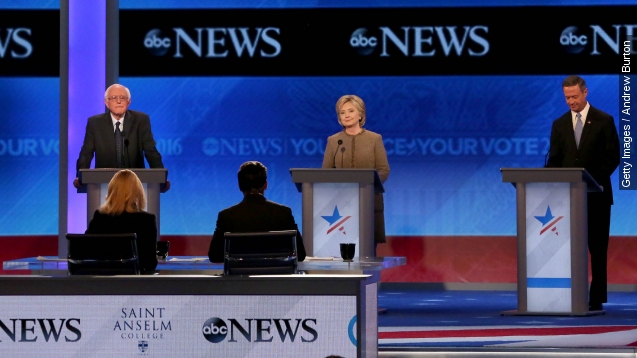 The biggest moments from the final #DemDebate of 2015.

The expected fight about the latest data breach was ... pretty civil.

"We should move on. I don't think the American people are all that interested in this," Clinton said.

At least for two candidates.

"We're listening to the bickering back and forth. Maybe that's normal politics in Washington. That is not the politics of high purpose people expect from our party."

Actually, Governor O'Malley was testy most of the evening.

"Excuse me no .... a ban on combat assault weapons David," O'Malley said.

As expected, terrorism dominated much of the discussion.

"They want American soldiers on the ground fighting them, giving them many more targets and giving them a great recruiting oppurtunity," Clinton said.

"I believe in action where we put together a strong coalition of forces," Sanders said.

The second hour was dominated by domestic issues including:

"This one fall under the category of 'I have actually done this'... I believe that all of our kids should go into an income-based repayment plan," O'Malley said.

And ... there's at least one GOP candidate that was mentioned throughout the debate.

"He is becoming ISIS' best recruiter. They are going to people showing videos of Donald Trump insulting Islam Muslims in order to recruit," Clinton said.