The (Taxpayer-Funded) Perks Of Being A Former President 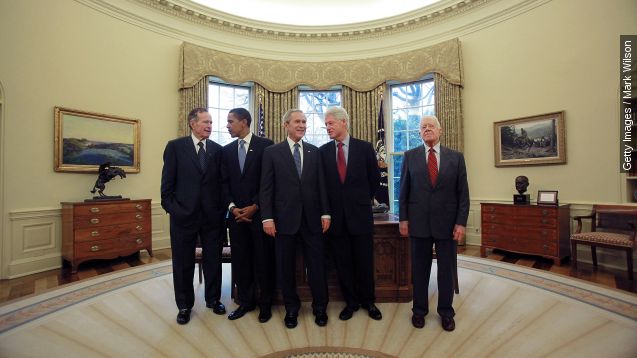 "We're back home now for good. We’re in the army of the unemployed now," President Harry S. Truman said.

When President Harry Truman left office, he struggled to afford the $30,000 a year it cost to respond to all his mail. Oh, how things have changed. (Video via U.S. National Archives)

"I've never had any money until I got out of the White House. … But I've done reasonably well since then,” Bill Clinton said during a forum in Cape Town, South Africa, in 2010. (Video via Global Forum 2010)

"Well," as in, the Clinton household earned $30 million in the past 16 months, most of that from paid speeches.

But it’s not as though Bill Clinton’s the only ex-president raking in millions on the lecture circuit. George W. Bush commands six-figure speaker fees. (Video via George W. Bush Presidential Center)

As have his predecessors — Jimmy Carter, the author of over two dozen books.

Clearly, they're all doing pretty well for themselves. Each of the four living presidents is a millionaire — a taxpayer subsidized millionaire.

The law provides presidents with lifetime benefits once they leave the Oval Office, including a pension, support staff and travel funds.

Taxpayers also pick up the tab for "a suitable office space, appropriately furnished and equipped" — which for George W. Bush and Bill Clinton meant a rental payment in 2014 north of $400,000, according to the Congressional Research Service.

But these perks might not last forever. The House Oversight Committee has advanced a bipartisan measure that would limit post-presidential budgets.

"Hopefully it will restore some dignity to the office of ex-president, Rep. Glenn Grothman said.

Specifically, the measure would set annual pensions at $200,000 a year, with an additional $200,000 allowed for other expenses.

Ex-presidents would also see their annual allowances reduced by a dollar for every dollar they earn in excess of $400,000. Somehow, we think they'll manage.

This video includes images from Getty Images and music by Skill Borrower / CC BY NC Sampling Plus 1.0.