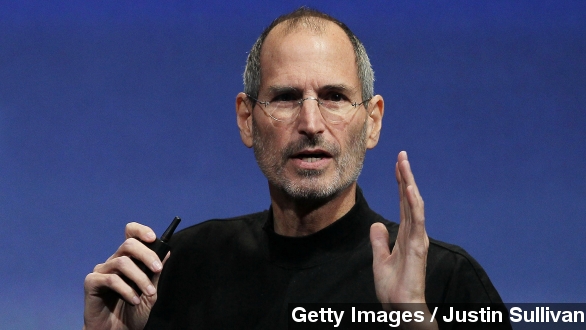 Apple higher-ups are throwing their weight behind a new biography of their former leader, Steve Jobs. At least in part because they really didn't like the last one.

The new biography is called "Becoming Steve Jobs" by Brent Schlender and Rick Tetzeli. It features a number of Apple execs talking about Jobs and about his legacy.

A legacy they feel was threatened by Walter Isaacson's authorized biography, published in 2011, just a couple weeks after Jobs' death. (Video via Bloomberg)

That's the biography Jobs personally asked Isaacson to write, based on dozens of interviews with Jobs and others. (Video via Computer History Museum)

"By the way, I want it to be honest; I want you to interview people who didn't like me as well as people who did," Isaacson said.

The biography that's getting turned into an Aaron Sorkin movie, which will hopefully do better than the 2013 biopic starring Ashton Kutcher, which bombed commercially and critically. (Video via Open Road Films / 'Jobs')

That biography was also immensely popular, selling millions of copies and becoming Amazon's best-selling book for 2011, and was even criticized as being too favorable. (Video via Comedy Central / "The Colbert Report")

But for some Apple execs, it seems the popular book wasn't favorable enough, with Apple CEO Tim Cook saying in the book: "It didn't capture the person. ... The person I read about there is somebody I would never have wanted to work with over all this time."

In a New Yorker profile last month, Apple's senior vice president of design, Sir Jonathan Ive, was similarly harsh, saying, "My regard couldn't be any lower."

The company as a whole seems to have gotten behind the new biography in what The New York Times calls "another sign of how Mr. Cook has shaped the company into one that is more open and vocal."

That includes tweeting in support of the book and hosting the writers for a book discussion at the company's store in New York's SoHo.

The new biography will be released Tuesday, March 24.

This video includes an image from Getty Images and Rob Boudon / CC BY NC SA 2.0 and music from Brenticus / CC BY 3.0.