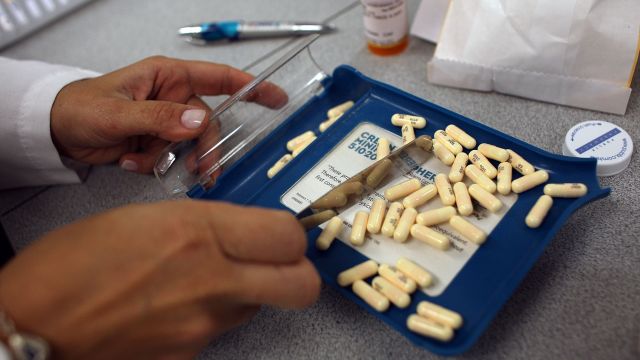 SMS
The 'Superbug' Doctors Are Freaking Out About Is Now In The US
By Katie Link
By Katie Link
May 26, 2016
The CDC says it's working with health officials in Pennsylvania to determine how the patient may have contracted the bacteria.
SHOW TRANSCRIPT

Researchers have long warned us that bacteria in our bodies is growing more and more resistant to antibiotics. But a new report indicates the end of antibiotics could be closer than we thought.

The study, released Thursday, discusses a case involving a 49-year-old Pennsylvania woman. Last month she tested positive for a strain of E. coli that's resistant to the "last resort" of antibiotics — a drug called colistin.

She's the first person in the U.S. to develop a type of bacteria that doesn't respond to any known antibiotic.

Bacteria that's resistant to colistin has been identified elsewhere; health officials across the globe started freaking out a few months ago when a strain was identified in pigs, raw pork meat and even people in China.

"What they've found this time is these bacteria are able to take that information, that gene, that makes them resistant, package it into an envelope called a plasmid and then send it to another bacteria that has never seen the antibiotic," Dr. Peter Lin told CBC.

Doctors warned the spread was inevitable. After learning of the first case in the U.S., the director of the Centers for Disease Control and Prevention told The Washington Post, "It basically shows us that the end of the road isn't very far away for antibiotics — that we may be in a situation where we have patients in our intensive-care units, or patients getting urinary tract infections for which we do not have antibiotics."

A review published earlier this month lends credit to that prediction — researchers estimate antibiotic-resistant infections, or "superbugs," could kill 10 million people each year by 2050.

The CDC says it's working with health officials in Pennsylvania to determine how the patient may have contracted the bacteria.

This video includes clips from the Centers for Disease Control and Prevention.