The Story Behind The Iconic Iwo Jima Flag-Raising Photo 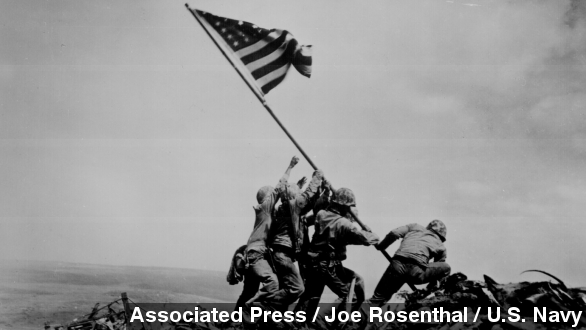 This iconic photograph of five U.S. Marines and one Navy corpsman raising an American flag over Iwo Jima is now 70 years old.

The flag raising — actually the second time an American flag was raised on Iwo Jima's Mount Suribachi — came before the battle for the island had drawn to a close. (Video via U.S. National Archives)

In fact, the flag was raised on the mountain more than a month before the military officially declared the island secure, and three of the Marines who raised the flag — Harlon Block, Franklin Sousley and Michael Strank — were killed during the battle.

The first flag raising happened a few hours before the second, but the first flag was smaller, and as Joe Rosenthal, the Associated Press photographer who captured the second raising, explained, orders came down to raise a bigger one.

Photographer Joe Rosenthal told the Newseum: "The colonel down below wants a bigger flag so it can be seen by the troops all over the island. ... He said also, he wants to make damn sure he got that first flag back."

The picture Rosenthal took became one of the most iconic images from the Second World War, and the three flag raisers who survived the battle — Marines Ira Hayes and Rene Gagnon and Navy corpsman John Bradley — were put to use after it ended.

Hayes in particular had a hard time after the war — he struggled with alcoholism and died less than 10 years after the flag raising. His story was told both in films like 1961's "The Outsider" and in a song Johnny Cash popularized in the '60s, "The Ballad of Ira Hayes." (Video via Universal Pictures / "The Outsider")

It was largely thanks to Hayes that one of his fellow flag raisers, Harlon Block, was properly identified, as he had been misidentified in the initial picture.

Gagnon and Bradley have since passed as well, but their part in the flag raising, and the picture that documented it, is commemorated at the U.S. Marine Corps War Memorial in Arlington, Virginia. (Video via American Legion)

This video includes an image from the Associated Press / Joe Rosenthal / U.S. Navy.