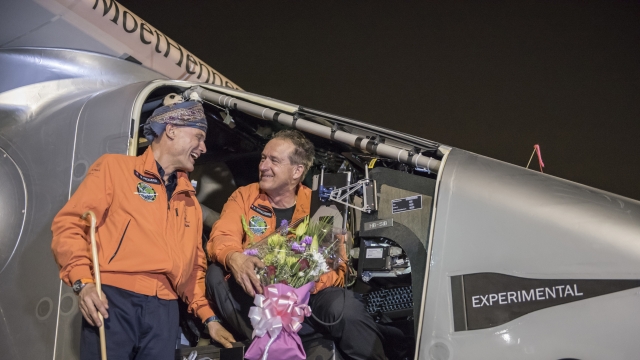 SMS
The Solar Plane Flying Around The World Is Preparing For Takeoff Again
By Samantha Crook
By Samantha Crook
April 16, 2016
Solar Impulse announced the plane will take off as soon as the weather allows.
SHOW TRANSCRIPT

After a few repairs and nine months, the solar plane flying around the world is ready for takeoff again.

"We deeply believe that we can achieve impossible and incredible things with renewable energies, like flying around the world with no fuel," a Solar Impulse pilot said.

After one of the pilots set a record for the longest nonstop solo flight, Solar Impulse had a bit of a setback. Last summer, some of the plane's batteries — used for night flight — overheated, forcing it to land in Hawaii.

Now that repairs are complete, the next leg of the journey will be flying over the Pacific Ocean, then across North America, the Atlantic and a couple more continents — eventually ending up where the plane started in Abu Dhabi.

The team says the journey is meant to showcase the potential of renewable energy and inspire sustainability efforts around the world.

Solar Impulse announced the plane will take off as soon as the weather allows.

This video includes images from Getty Images and clips from Solar Impulse.