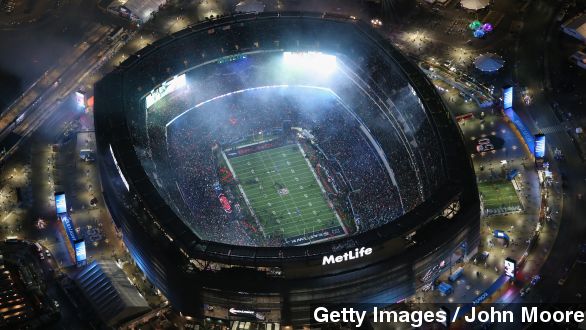 SMS
The Slow Death Of The NFL's Blackout Policy
By Jamal Andress
By Jamal Andress
March 23, 2015
The NFL will suspend its blackout policy for the 2015-2016 season, which means all games featuring a city's home team will be shown locally.
SHOW TRANSCRIPT

The NFL owners have voted to suspend one of the most criticized rules on the books for at least one year.

The NFL will suspend its blackout policy for the 2015-2016 season, which means all regular and preseason games featuring a city's home team will be shown in that city's local market. The blackout policy kept any broadcaster within 70 miles of the stadium from showing the home game unless the game sold out 72 hours before kickoff.

The policy was meant to encourage fans in the area to go to the games instead of curling up on their couches and watching from home. But all it has ever proved to do is make fans angry. (Video via YouTube / EarthCam)

"From a practical standpoint this is an archaic rule; it's a bit outdated. ... Revenues for NFL teams are slanted toward broadcast revenues. They get so much money from the networks; the gate receipts are minuscule," correspondent Andrew Brandt said on ESPN.

Among those angry fans were some congressmen, more specifically Arizona Sen. John McCain who called for the end of the blackout policy back in December.

"The rules as they are today only serve to benefit the sports leagues and their member teams at the expense of the hard-working fans," McCain said.

Along with Congress, the NFL has received pressure from the FCC who voted unanimously to scrap the rule last year. And while that had no effect on the actual policy, the vote did serve as one more group screaming for the rule's repeal.

There was a period in time when some NFL teams were having trouble making money, but that time has surely passed. According to Forbes, the St. Louis Rams and Buffalo Bills have the smallest revenue streams in the NFL at $250 million and $252 million respectively. Minus operating cost and player expenses, both teams are still bringing in upwards of $75 million.

Last year there were no blacked out games, and the year before that, two games were blacked out.

This video includes images from Getty Images and music from Kevin MacLeod / CC By 3.0.