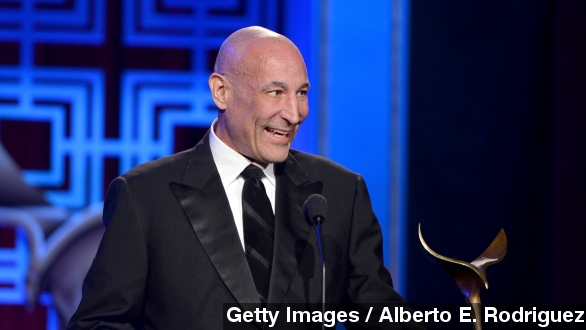 SMS
'The Simpsons' Co-Creator Sam Simon Dead At 59
By Steven Sparkman
By Steven Sparkman
March 9, 2015
Sam Simon, who worked on some of the most loved TV shows of all time, died Sunday of colorectal cancer, leaving most of his fortune to charity.
SHOW TRANSCRIPT

Sam Simon, the director, writer and producer behind some of the most loved shows on television, died of colorectal cancer Sunday at the age of 59.

Simon's early career included working as a writer and showrunner for "Taxi" before becoming a writer and producer on the iconic sitcom "Cheers."

But his most recognizable work came in the late '80s when he helped launch "The Simpsons," working alongside Matt Groening and James L. Brooks.

Simon left the show in 1993, continuing to work on TV shows like "The Drew Carey Show." But his wealth from "The Simpsons" helped him pursue his other passions, most notably animal rights.

In 2002, he self-funded the Sam Simon Foundation, which trains rescue dogs to work with people with disabilities and also provides free veterinary care in low-income areas.

He supported the Sea Shepherd Conservation Society, the stars of Animal Planet's "Whale Wars," with the group naming one of its ships the MY Sam Simon. PETA even named its headquarters after him.

"I think the battle for animal rights is the most important battle. ... It's a battle that wouldn't exist without PETA," Simon said.

Simon was diagnosed with terminal colorectal cancer in 2012 and months later told The Hollywood Reporter he planned to leave nearly all of his fortune to charity.

Simon's death was confirmed by his foundation Monday with a Facebook post saying, "We all miss him, and in his honor, we will continue bringing his vision to light through our work."

And current "Simpsons" showrunner Al Jean suggested, "If you would like to honor Sam's memory, do something nice for the next animal you meet."

This video includes images from Getty Images and Saberwyn / CC BY SA 3.0.