The Silence Was Deafening When Pope Francis Visited Auschwitz 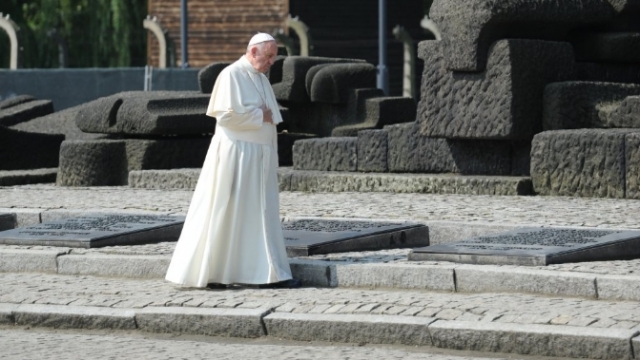 SMS
The Silence Was Deafening When Pope Francis Visited Auschwitz
By Briana Koeneman
By Briana Koeneman
July 29, 2016
The pope spent most of his historic visit to the former Nazi concentration camp in silent prayer and reflection.
SHOW TRANSCRIPT

Pope Francis visited Auschwitz on Friday to pay his respects to the thousands of people who lost their lives there during World War II.

And he spent most of the historic visit at the former Nazi concentration camp in silent prayer and reflection.

Soon after his arrival, the pope sat alone on a bench for several minutes with his eyes closed.

Then, after meeting with a group of former inmates of the camp, he spent several more quiet moments inside the cell of Maximilian Kolbe. He was a Franciscan priest and saint who volunteered to take the place of a prisoner who was condemned to die.

Ahead of the trip, Pope Francis said he wanted it to be in silence.

He told reporters earlier this month: "I would like to go to that place of horror without speeches, without crowds — only the few people necessary. Alone, enter, pray. And may the Lord give me the grace to cry."

But before he left Auschwitz, the pope wrote a brief message in the memorial book.

"Lord, have mercy on your people. Lord, forgive us for so much cruelty."

Pope Francis is the third consecutive pope to visit the site, where more than 1 million people, mostly Jews, were killed by Adolf Hitler's forces during World War II.

This video includes clips and images from the Auschwitz-Birkenau State Museum, clips from CTV and an image from Getty Images. Music courtesy of Chris Zabriske / CC BY 3.0.