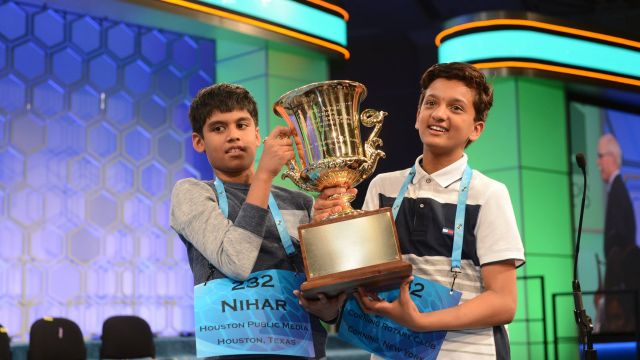 Eleven million students around the world. 284 spellers in Washington, D.C. Narrowed down to 45 finalists. Whittled down again to 10 final finalists for the Scripps National Spelling Bee.

And in the end, Feldenkrais and gesellschaft were the words of the night.

Jairam Hathwar from Painted Post, New York, and Nihar Janga from Austin, Texas, won the bee and all the prizes that come with it: $40,000 cash; $2,500 in savings bonds; a trip to New York City; an engraved trophy; and more.

For the third year in a row, the annual competition ended with co-champions. This was the second trip to the Scripps National Spelling Bee for 13-year-old Jairam and the first for 11-year-old Nihar.

After the preliminary written test, Jairam and Nihar each spelled 36 words correctly on stage to nab that title of spelling bee champions.

This video includes clips from WMAR and ESPN and images from the Scripps National Spelling Bee. Newsy is a subsidiary of The E.W. Scripps Company.