The Science In 'The Martian' Isn't Fiction 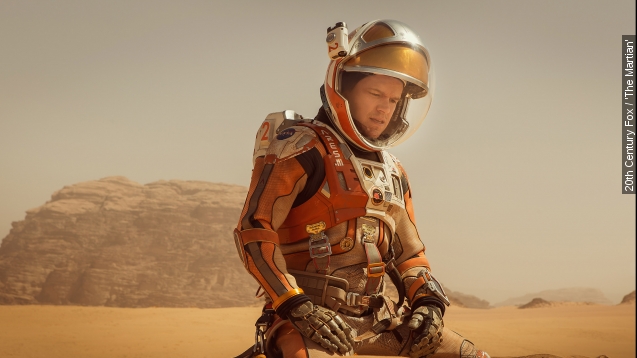 When NASA announced there was water on Mars, there was one non-scientist in the world who wasn't totally shocked: director Ridley Scott.

Scott learned about water on the red planet while researching his film "The Martian" to make it as realistic as possible. He told The New York Times the head of NASA showed him photographic proof.

He told Yahoo Movies he asked the scientists if the glaciers on Mars meant there was once an ocean there. He said: "Are we right now what Mars was 750 million years ago? And they went, 'Uh, good question.'"

Luckily, Scott learned this information after production had finished, so it was too late to scrap the film after NASA's water discovery. That would have made things easier for Matt Damon's character who gets stranded on the planet. (20th Century Fox / "The Martian")

"It essentially is about survival and how he survives using his knowledge and skill as a botanist," Scott said in an interview.

Part of those survival skills include creating water and humidity to irrigate plants, so a major plot point would have had to be reworked.

"Obviously, the other pressing issues for him are water and food. ... He's gotta have enough water so he doesn't die of thirst," Damon said.

In a lot of movies, realistic accuracy isn't a big deal. But all of the head production members were on board with making the film as scientifically accurate as it was science fiction.

"When I talked to Drew, who wrote the script, he called it a love letter to science; that's how he felt about it," Matt Damon said.

Damon's "love letter to science" comment reflects the author's attention to detail in the book the movie is based on.

Author Andy Weir told NPR, "I was sitting around thinking how a manned mission to Mars would work using today's technology and all the things that could go wrong."

Because of that, and an extreme love for space travel, Weir made sure the technology in the story could exist in the real world. He told Mashable the "book versions [of the technology] are the more effective or the more efficient versions of that technology."

The obsession with being scientifically and technologically accurate is enough for some of NASA's senior scientists to believe it will help make their "Journey to Mars" mission a reality. (Video via NASA)

And what's even cooler is the book is "required reading" at the NASA Johnson Space Center and the film has been screened twice at NASA and for the crew aboard the International Space Station. "The Martian" hits theaters this Friday.