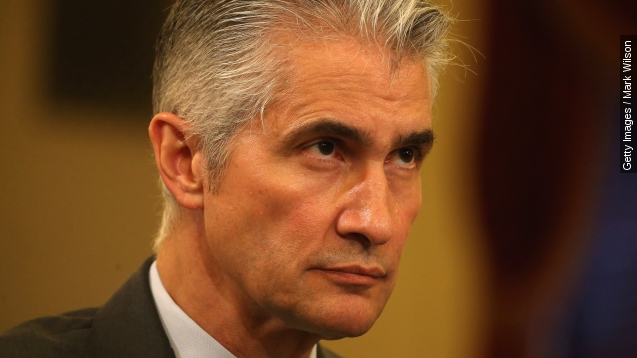 SMS
The Scandals United's Ex-CEO Jeff Smisek Leaves Behind
By Carter Woodiel
By Carter Woodiel
September 8, 2015
There's been a shake-up at the top of America's third-largest airline: United's CEO has resigned amid a federal corruption investigation.
SHOW TRANSCRIPT

There's been a shake-up at the top of America's third-largest airline: United's CEO has resigned amid a federal corruption investigation.

Jeff Smisek stepped down in connection with a Justice Department investigation into whether the airline attempted to influence the chairman of the Port Authority of New York and New Jersey. (Video via United Airlines)

That’s the government agency in charge of overseeing the airport in Newark, New Jersey, just outside of New York City, which happens to be one of United’s biggest hubs.

United sought improvements for the airport and is accused of trying to get on Port Authority chairman David Samson's good side, sometimes through corrupt means. (Video via United Airlines)

One item under investigation is a curious flight route United started offering a few years ago from Newark to Columbia, South Carolina.

According to investigators, the flight didn’t turn a profit for the airline, but it ran twice a week anyway because Samson owned a vacation home in South Carolina. According to media reports, the route became known around the company as the “chairman’s flight.” (Video via United Airlines)

Samson was a close adviser to New Jersey governor Chris Christie, and he stepped down from his post last year following the “Bridgegate” scandal, where lane closures on the George Washington Bridge caused massive jams, allegedly as political payback. (

United canceled its Newark-Columbia flights just after Samson’s resignation, another fact noted by the investigators.

Smisek took the top post of United in 2010 after it merged with Continental. As part of his separation from the company, he’ll receive a payment of roughly $4.9 million. (Video via United Airlines)