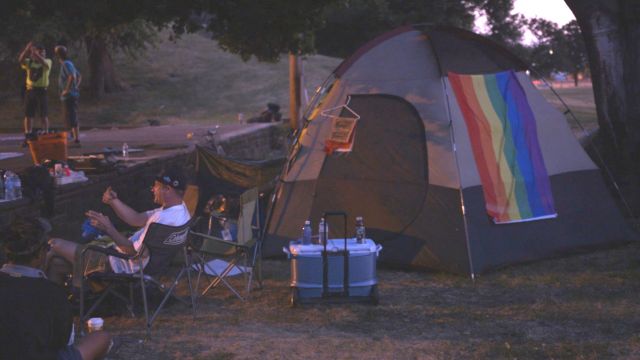 SMS
The RNC Campsite Has A Few Tents And A Lot Of Political Views
By Melissa Prax
By Melissa Prax
July 20, 2016
A handful of pro-Trump advocates and many convention protesters have accepted the city of Cleveland's offer to camp at a nearby park.
SHOW TRANSCRIPT

This Cleveland park hosts both protesters and Trump supporters.

They're actually pitching tents and camping out for the RNC.

"There's all these different affiliations, but all the people that are camped are camped as individuals. ... Everybody with a bellybutton has a home," said David Guthrie, a camper.

"It's a lot of effort to drive in wherever you're driving in from, get here in the middle of the night, pitch a tent, get sleeping on the rocky surface and then get up and go protest all day. It takes some dedication, but when the issues we face as a country are so great, it's more than worth it to me," a camper said.

The city of Cleveland set the park aside for campers.

"I think it's a bit away from downtown, but that's typical of the RNC. It's going to be farther away; it's going to be not such a great space," said camper David Scott.

The number of campers is growing.

"We encourage conversation and listening with people of diverse thoughts, and so far, that's been a really groovy thing," Guthrie said.