The Risks, Rewards Of Ginsburg Staying On The Bench 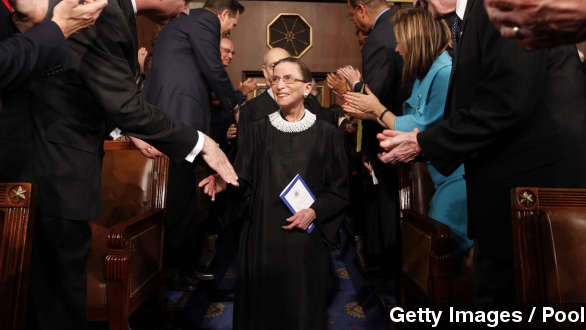 SMS
The Risks, Rewards Of Ginsburg Staying On The Bench
By Erik Shute
By Erik Shute
November 27, 2014
Both sides of the aisle are discussing the importance of Justice Ruth Bader Ginsburg's recent health procedure and whether she'll continue working.
SHOW TRANSCRIPT

Supreme Court Justice Ruth Bader Ginsburg is expected to make a full recovery after a heart procedure Wednesday. However, that didn’t pause a political gut reaction to her hospitalization with many mulling over her replacement.

At 81, Ginsburg is the oldest sitting justice and considered a primary leader of the court’s liberal wing.

Several sources noted the timing of the justice’s operation was key — just three weeks after Republicans gained control of Congress during midterm elections. Creating another liberal vacancy by Ginsburg’s departure wouldn’t be ideal for Democrats. (Video via Voice of America)

However, with doctors green-lighting Ginsburg to return to work on Monday, the media shifted its focus from whether President Obama would find a replacement to if there was time for the commander in chief to do it at all. (Video via CNN)

With a boost of new conservative power on Capitol Hill in January, Obama’s new and slightly less Republican justice presumably wouldn’t find any legs to move through Congress.

Other sources, such as MSNBC, noted Democrats could find themselves in a worse situation if Ginsburg’s health continues to be an issue while Republicans make a strong run in 2016.

Her recent health problem might also have some Democratic analysts saying, in a few words, “I told you so.”  They urged Ginsburg and 71-year-old justice Stephen Breyer to step down so Obama could put two fresh faces in the nine before midterm elections took place.

Both sides of the aisle knew this when calling for Ginsburg’s retirement, something she has vigorously opposed before.

For Democrats, her seat is a last resort to push liberal policy through on any 5-4 decisions. For Republicans, the seat is would seal a major victory for the same reason.

However the two-time cancer survivor isn’t one to back down. In a soundbite clipped by the The Today Show Thursday, she makes a case for her own worth.

"In life, it's always what is the alternative? If I stay or someone, if anyone could get through, it would not be someone that has my record," said Justice Ruth Bader Ginsburg.

We'll tend to assume that sentiment has not changed after her procedure. The justice is expected to be released from the MedStar Washington Hospital Center in the next 48 hours.