The Reigning NBA MVP Is Torching The League 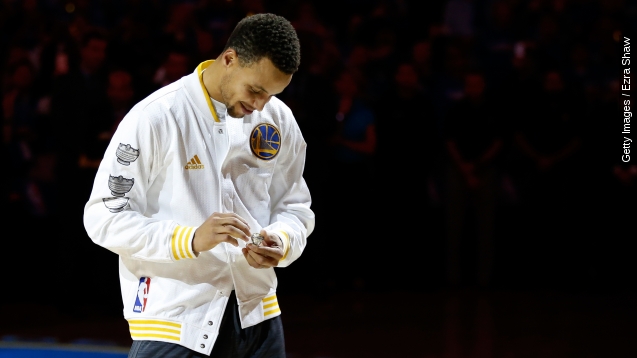 SMS
The Reigning NBA MVP Is Torching The League
By Jamal Andress
By Jamal Andress
November 3, 2015
Steph Curry is averaging more points through four games than anybody in the past 20 years, and he's doing it in less time.
SHOW TRANSCRIPT

It's only four games into the season, but Steph Curry looks really good.

The reigning NBA MVP was named Western Conference player of the week and rightfully so. His Warriors are 4-0, and he's averaging more points through four games than anybody in the league.

But that's just the tip of the iceberg. Curry and Golden State are hitting historic milestones every night.

The Warriors managed to beat the Memphis Grizzlies by 50, handing the Grizz their worst loss in franchise history. It's worth mentioning this is a Grizzlies team that went to the conference semis just last year.

The game before that, Curry hung 53 on Anthony Davis and the Pelicans, one point shy of his career high. Also, 28 of those points came in the third quarter and that is a career high.

Also, he's doing it in record time. He's the NBA scoring leader but averaging fewer minutes than the next nine players on that list.

The offensive production from Curry this early in the season is only comparable to three players in history: Wilt Chamberlain, Jerry West and Michael Jordan.

Admittedly, "Wilt the Stilt" has everybody beat, scoring 152 points in his first three games.

Speaking of Chamberlain: Curry and the hall-of-famer share another stat. Chamberlain, Curry and Kareem Abdul-Jabbar are the only reigning MVPs to score 40 points in their season openers.

Again, it's only been a week, and it'll be another few months before we know if this will be a season-long trend or if Curry is just on a tear. Either way, he's had one hell of a start.