The Reason Jon Stewart Went Back To 'The Daily Show' 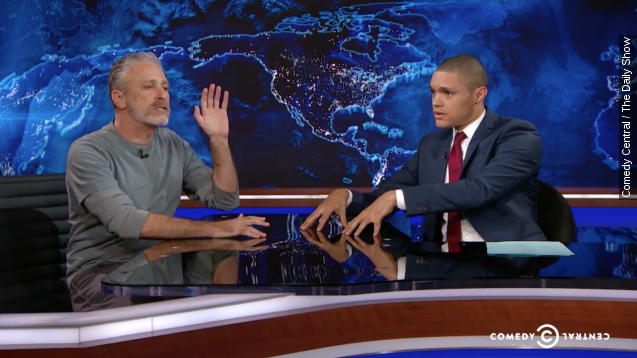 Jon Stewart has returned to "The Daily Show"! Sort of.

But it wasn't just a friendly visit. The former host brought nothing but bad news.

"The only conclusion I can draw is that the people of Congress aren't as good of people as the people who are first responders," Stewart said.

It's all about the Zadroga Act, signed by President Obama in 2011. It provides health benefits to 9/11 first responders, many of whom have cancers and trouble breathing because of the toxic air they were breathing for weeks on end.

Some portions of the bill expired this year, and funding for the bill is expected to run out by next summer.

A bill to reauthorize the benefits was introduced in April, but Congress has yet to pass it. It was eventually added to a highway funding bill to help pay for the benefits, but was pulled out at the last minute by Senate Majority Leader Mitch McConnell, leaving some lawmakers concerned about how to pay for it.

As the clock ticks, first responders and Stewart have gone back and forth to Congress, lobbying lawmakers who haven't signed on to back the reauthorization act. (Video via The Huffington Post)

It's estimated that more than 70,000 Americans are currently receiving benefits, including 3,600 who have cancer from their involvement in the cleanup after 9/11.