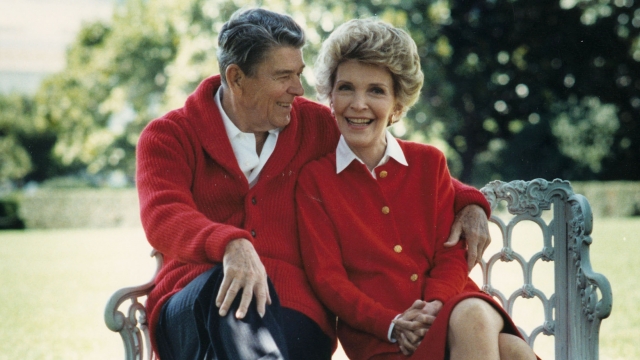 SMS
The Reagans' Legacy On HIV/AIDS Is Not As Rosy As Clinton Remembered
By Eugene Daniels
By Eugene Daniels
March 11, 2016
The Reagan White House's response to the epidemic has been widely criticized as homophobic and coming way too late.
SHOW TRANSCRIPT

"Because of both President and Mrs. Reagan, in particular Mrs. Reagan, we started a national conversation," presidential candidate and former first lady Hillary Clinton said Friday.

Before former first lady Nancy Reagan was buried Friday, Hillary Clinton praised the Reagans for their "low-key advocacy" during the HIV/AIDS epidemic of the 1980s. But it seems like Clinton is in the minority.

After she made the comment, social media blew up with people confused, angry and offended by it. And the Internet outrage seems well-placed because the Reagans have a very, let's call it complicated, legacy with HIV/AIDS.

President Reagan didn't give a speech on the disease until 1987, pretty close to the end of his second term and about six years after the Centers for Disease Control and Prevention began noting the disease. The White House's response to the epidemic has been widely criticized as homophobic and coming way too late.

A short film on White House press briefings about the AIDS epidemic seems to show almost nonchalance from the administration.

"Is the president concerned about this subject, Larry?" a reporter asked Reagan's press secretary.

"No, but I mean is he going to do anything, Larry?"

"Lester, I haven't heard him express anything, sorry ..."

Nancy Reagan's friend and actor Rock Hudson, who was dying of AIDS in 1985, reportedly asked the first lady for help in getting better treatment to fight the disease; she denied his request for help. But historians do credit Nancy Reagan with pushing her husband to get funding for AIDS research.

"I think she deserves credit for opening up the AIDS money, but I could never say that without saying they never would have waited this long if it was red-headed sixth-graders," historian Allida Black said.

But it's pretty obvious to critics of the Reagans that the federal government's reaction to HIV/AIDS could have and should have happened much sooner.

Clinton has since apologized for the comment, saying "I misspoke about [the Reagans'] record on HIV and AIDS. For that, I'm sorry."

This video includes images from Getty Images and clips from CNN and C-SPAN.