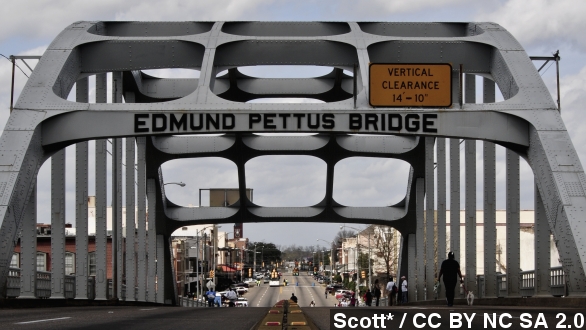 SMS
The Racist Backstory Behind Selma's Edmund Pettus Bridge
By Jake Godin
By Jake Godin
March 7, 2015
The iconic bridge in Selma, Alabama, has a namesake quite unlike what the bridge has come to symbolize, and some want the name changed.
SHOW TRANSCRIPT

In 1965, protesters marched across the Edmund Pettus Bridge in Selma, only to be forced back by state troopers in what became known as Bloody Sunday. (Video via PBS / "Eyes on the Prize")

Since then, the Edmund Pettus Bridge has become a symbol of the civil rights movement. (Video via Story of America / Annabel Park & Eric Byler)

But the bridge’s namesake, Edmund Winston Pettus, represented the complete opposite for African Americans. (Video via YouTube / d1bottch)

Pettus served not only as a Senator from Alabama and Confederate general during the Civil War, but also as a Grand Dragon within the Ku Klux Klan afterward.

The bridge was named after Pettus when it was built in 1940. John Giggie, a Southern history teacher at the University of Alabama, told NPR it was done to send a message. (Video via Alabama Tourism Department)

“They wanted to stamp that — to brand it — with this vision of the South as very much as a ... a world dedicated to white supremacy.”

That’s why there are now multiple calls to get the bridge’s name changed to something else.

In an op-ed for CNN, Douglas Brinkley suggests the bridge should be renamed to The John Lewis Bridge. Lewis helped lead the march across the bridge in 1965 as the former chairman of the Student Nonviolent Coordinating Committee and is currently a U.S. congressman.

Then there’s a Change.org petition with more than 155,000 signatures calling for the bridge’s name to be changed. The petitioner told MSNBC the goal is more to get a dialogue started on the name change rather than change it to something specific.

“So our hope is that we can open up a dialogue within the city and can pick a name that’s more appropriate for the future.”

But not everyone is backing the idea of a name change. A Selma representative told WTVY it could be a difficult task.

“It’s a federal landmark now. I understand the hurt, the pain that it still evokes in some people, so many visuals, but yet that bridge is a part of our history.”

James Perkins, who became Selma’s first African American mayor in 2000, told AL.com the name should remain as a rhetorical bridge between Selma’s past and its future. (Video via City of Centerville, Ohio)

It's not clear whether the Edmund Pettus Bridge will come to be known by another name in the future. The petition still needs about 40,000 more signatures before it's submitted to the U.S. National Parks Services and Alabama's governor for consideration.

This video includes images from Getty Images and Scott* / CC BY NC SA 2.0, and music by Library of Congress / McMurray.