The Puzzling Relationship Between Pandas And Bamboo 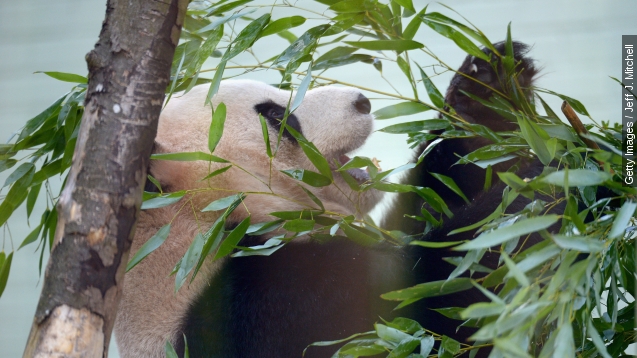 One of panda bears' most famous traits is that they eat bamboo, and a lot of it. The plant makes up most of the bear's diet. (Video via YouTube / meiko 米可)

But new research suggests, after some two million years of eating it, the panda's digestive system still may not be all caught up. (Video via World Wide Fund for Nature)

Researchers in China looked at the bacteria in panda poop — because science is glamorous like that — and compared what they found to 54 other mammals, including herbivores and other bears.

Microorganisms like bacteria often live in animals' digestive systems and in some, including us humans, they play important roles, like digesting plant fiber. (Video via Cambridge University)

The researchers found the panda's microorganisms much more closely resembled those of other carnivores and omnivores, and were missing the bacteria that helps other animals digest plant fiber, suggesting they're still not adapted to eating bamboo. (Video via National Geographic)

But other scientists have called that conclusion into question.

Jonathan Eisen, a microbial biologist at the University of California Davis told Nature, "some of the microbes in the panda gut might still be highly efficient at breaking down cellulose."

Eisen argues the scientists only looked at what microorganisms were found in the panda, and not what functions they actually carry out in the panda's digestive system.

And considering the panda has physically adapted over the millions of years it's eaten bamboo, developing a special thumb pad that helps it better grasp the chutes, it would be surprising if its digestive system hadn't followed suit. (Video via Smithsonian Institution)

Scientists theorize pandas started eating bamboo when they first moved to the higher elevation of the Chinese mountains where they live today, as a way of avoiding competition for prey with the predators already established there. (Video via Natural Habitat Adventures)

Like most bears, pandas are actually omnivores, and while they mostly eat bamboo, they will also eat meat if presented with it.