The Promising Language Of The Paris Climate Agreement 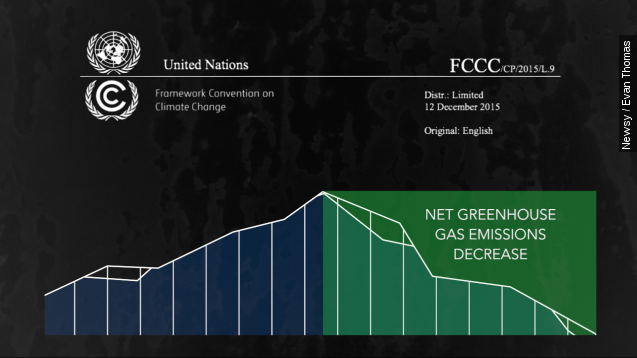 SMS
The Promising Language Of The Paris Climate Agreement
By Evan Thomas
By Evan Thomas
December 12, 2015
Negotiators have approved an ambitious plan to reduce the effects of anthropogenic climate change.
SHOW TRANSCRIPT

A plan for long-term climate management is agreed to in Paris — and the participating nations expect to slow down the planet's gradual warming. (Video via French Ministry of Foreign Affairs)

"Parties aim to reach global peaking of greenhouse gas emissions as soon as possible," states Article 4 of the draft.

The goal is to balance human-caused carbon emissions and natural carbon sinks "in the second half of this century."

The agreement will "reflect equity and the principle of common but differentiated responsibilities and respective capabilities."

In other words: Each nation will do what it can, and will make more ambitious reductions to emissions as technology improves. (Video via French Ministry of Foreign Affairs)

There will be checkups, "Each Party shall communicate a nationally determined contribution every five years."