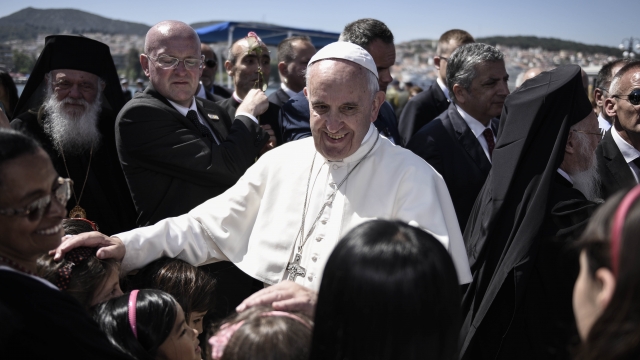 By Ben Lawson
August 1, 2016
The pope says people from all religions commit violence. He points to something else as the cause of terrorist attacks.
SHOW TRANSCRIPT

The pope told reporters: "If I talk about Islamic violence, then I also have to talk of Catholic violence. Not all Muslims are violent, just like not all Catholics are violent."

He explained that he reads stories in newspapers all the time about Catholics committing violence against a girlfriend or mother-in-law.

His comments were in response to questions about the recent terror attack at a church in France. The attackers, who claimed they were with ISIS, killed a priest.

He went on to say that terrorism has grown because the world economy worships the "god of money" and people feel they have no other option.

The pope's rhetoric on extremists is somewhat similar to the Obama administration's. The president and his staff have avoided the term "Islamic extremism" and instead call terrorists "violent extremists."

White House aides say that's to avoid making it sound like the U.S. is at war with the whole of Islam — which is what terrorist groups want.

This video includes clips from the Vatican, France 24 and The White House.