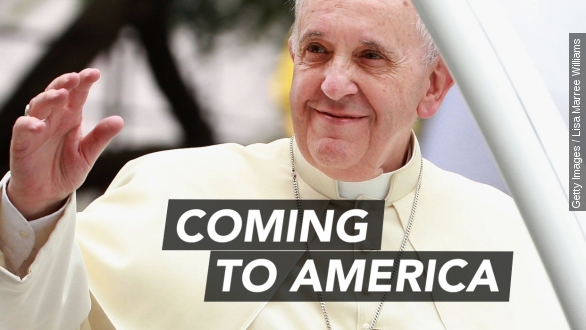 The pope is coming stateside, and he'll have some pretty prestigious company when he gets here. (Video via CTV)

This will be Francis’ first trip to the U.S. since becoming pontiff. According to a statement, he will sit down with the president to discuss economic inequality, the environment, religious freedom and immigration. (Video via ODN)

Of course, the White House won't be his only stop. (Video via YouTube / Travel Links Directory)

The pope plans to be in the country from Sept. 22 to the 27th. During that time, he'll also speak at the U.N., attend the World Meeting of Families in Philadelphia and become the first pope to address a joint meeting of Congress. (Video Via United Nations, YouTube / WorldMeeting ofFamilies, Office of U.S. Speaker of the House John Boehner)

The pope’s congressional address was initially announced by House Speaker John Boehner back in February.

“We’re humbled that the Holy Father has accepted our invitation and certainly look forward to receiving his message on behalf of the American people,” Boehner said. (Video via The Washington Examiner)

The pope and the president have met before when President Obama visited the Vatican in March 2014. (Video via Rome Reports)

"Wonderful to meet you. Thank you so much," Obama said to the pope during their first encounter.

According to the White House, the president and pope will continue their dialogue from last year's meeting. (Video via CBS)