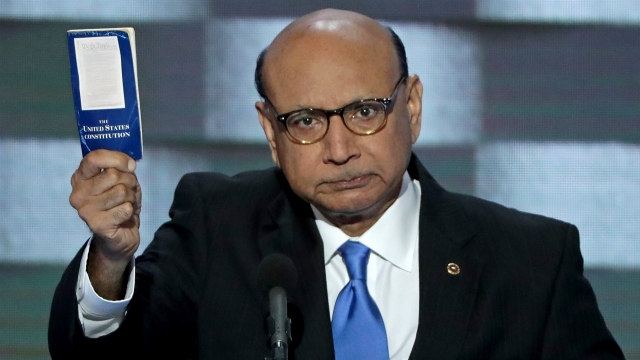 "Have you even read the United States Constitution? I will gladly lend you my copy," Khizr Khan said during his speech last week at the Democratic National Convention.

That moment — when the father of a Muslim U.S. soldier killed in Iraq addressed Donald Trump directly — has been played many times over the past few days.

Khan said if Trump's proposed ban on Muslims entering the U.S. was enacted years ago, his son would never even be in the country, let alone be a soldier who gave the ultimate sacrifice.

SEE MORE: Trump Doesn't Agree With The Father Of A Slain US Soldier On Sacrifice

And it appears to have improved sales for the pocket-size Constitution.

The $1 Pocket Constitution reportedly made its way to the top of Amazon's list of best-selling books Saturday afternoon. As of Monday morning, it was No. 2 on the list.

But you don't even need to buy one. A quick Google search for "free constitution" leads you to a site where you can print one. Or, you can just go to the ACLU's website. It's running a promotion through the election that makes the pocket-size version free using a coupon code.

The sales increase comes as Trump and the Khans engage in a very public back-and-forth regarding Trump's statement about the speech.

This video includes clips from the Democratic National Committee and images from Twitter / @realDonaldTrump and Getty Images.