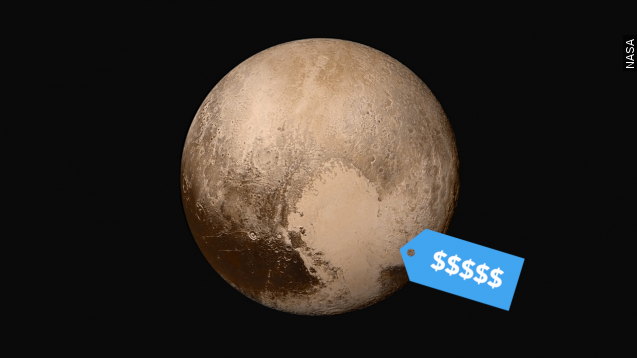 NASA was on Capitol Hill this week, making the case for its planetary exploration budget. (Video via Google Earth)

It’s holding up its New Horizons mission to Pluto as ongoing evidence for the importance of that funding.

In recent days, information from the piano-sized probe has shown a minor planet that's larger than expected, with its own hazy hydrocarbon atmosphere and evidence of an internal ocean.

Maybe even more exciting, NASA has received only 5 percent of the data New Horizons has collected so far. It will take until sometime in 2016 to transmit the rest of it back, and actual analysis is expected to take years. (Video via NASA)

Dr. John Grunsfeld of NASA’s Science Mission Directorate asked, "Are we alone? We are on the cusp of being able to answer that question … because of the investments we're making in space technology."

Rhetoric aside, he has a point, and some lawmakers seem to see it.

“It is crucial that NASA continue to explore our solar system. Planetary science teaches us about how our solar system works and provides clues about how it was formed,” said committee chairman Lamar Smith. (Video via the House Committee on Science, Space, and Technology)

NASA's budget has big implications for its current and future projects: Maintenance costs on the New Horizons mission alone will have hit some $700 million by the end of 2016.

And it’s planning two more exploration-class missions to Mars and Europa, one of Jupiter's moons, for the mid-2020s — which needs funding from somewhere. (Video via NASA)

All the while, its budget is the subject of vigorous legislative discussion.

In June, the House approved a 2016 NASA budget that increased funds for planetary exploration at the expense of its Earth sciences budget: The money it allocates to Earth-facing research. (Video via Newsy)

That proposal would slice $77 million from NASA's exploration budget. The House Committee on Science, Space, and Technology would see that restored.

“I would like us, as members of Congress, to step aside and make sure we provide you the resources you need, and expect that we may not know the value of that for 50 years in the running. I am indeed okay with that,” said committee member Donna Edwards. (Video via the House Committee on Science, Space, and Technology)