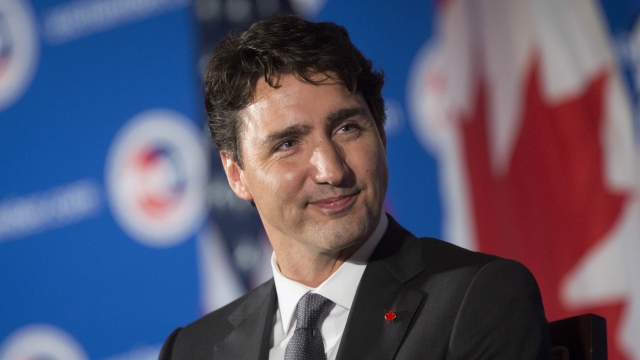 SMS
The People's Elbow: Justin Trudeau Apologizes For Jostling Politician
By Katie Link
By Katie Link
May 19, 2016
He said he was sorry and got a standing ovation.
SHOW TRANSCRIPT

Let us explain. On Wednesday, the Canadian prime minister marched over to a group of MPs in the House of Commons and grabbed Conservative whip Gordon Brown by the arm, leading him out of the group.

But Trudeau apparently forgot about spatial awareness — the video shows him elbowing New Democrat Ruth Ellen Brosseau as he pulled Brown out of the group so they could begin voting.

Trudeau circled back, and a shouting match ensued.

Leave it to the Internet to take the moment and run with it. The hashtag #elbowgate started trending quickly, and video of the altercation went viral.

His cohorts were understandably upset: "I watched him as he grabbed the official opposition's whip, my good friend, by the arm. I also watched him as he yelled something so out of line that I will not repeat it," Conservative Rona Ambrose said.

Trudeau put his tail between his legs and begged for forgiveness — repeatedly.

"I apologize to my colleagues, to the House as a whole and to you, Mr. Speaker, for failing to live up to a higher standard of behavior," Trudeau said.

Looks like it's apology accepted — for now, at least.