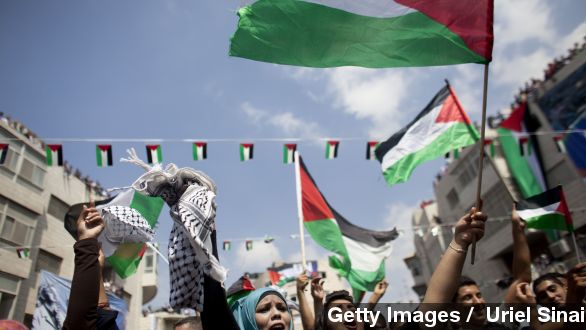 For decades, the Palestinians and Israelis have been at odds over how to create long-term peace in the region. (Video via William J. Clinton Presidential Library)

With talks between the two sides on hold, the Palestinians are pursuing a different strategy — getting the international community to recognize Palestine as an independent state. But what exactly qualifies a state for statehood?

The most commonly cited criteria are found in this document. According to the 1933 Montevideo Convention, a state must have "a permanent population; a defined territory; a government; and the capacity to enter into relations with other states."

So, that's the formal definition of a state, and a lot of experts say the Palestinians meet those requirements. But practically speaking, a state is only a state when other states recognize it.

That's something the Palestinians have been working on since 1988, when Yasser Arafat — then head of the Palestinian Liberation Organization — first declared Palestine a state. (Video via INA)

He didn't specify the borders, but the state most envision includes the West Bank and the Gaza Strip, with East Jerusalem as the capital.

Those are the territories seized by Israel during the six-day 1967 war. (Video via U.S. National Archives)

Today, 135 of the U.N.'s 193 members officially recognize that land as belonging to the state of Palestine. The rest of the world, including the U.S., views the Palestinian territories as land under Israeli occupation.

"The Palestinian people have a right to an independent and viable state of Palestine," U.N. Secretary General Ban Ki-moon said in 2012. (Video via BBC)

In 2012, the Palestinians got one step closer to statehood. That year the U.N. General Assembly overwhelmingly voted to change Palestine's status from an "observer entity" to a nonmember "observer state" — the same status the Vatican holds. (Video via Channel 4, Euronews)

But the U.N. stopped short of full statehood recognition. Only the Security Council can extend "full member" status, and it hasn't yet. (Video via The White House)

In December, by a vote of 8 for, 2 against, and 5 abstentions, the Security Council rejected a Palestinian-backed resolution calling for an end to Israeli occupation in the West Bank and Jerusalem.

But even if the Palestinians had secured enough votes, the U.S. would have surely exercised its veto power.

"We voted against it because we know what everyone here knows as well. Peace will come from hard choices and compromises that must be made at the negotiating table," Samantha Power said. (Video via NTDTV)

The U.S. maintains Palestinian statehood can only be achieved through direct bilateral talks. The latest round stalled in April. (Video via The White House)

Although it's tempting to dismiss all of this as merely symbolic, the Palestinian strategy toward achieving statehood has some real implications.

This video includes an image from United Nations / CC BY-NC-ND 2.0.