The Oscar Red Carpet Shined Like The Gold Everyone Dreams Of 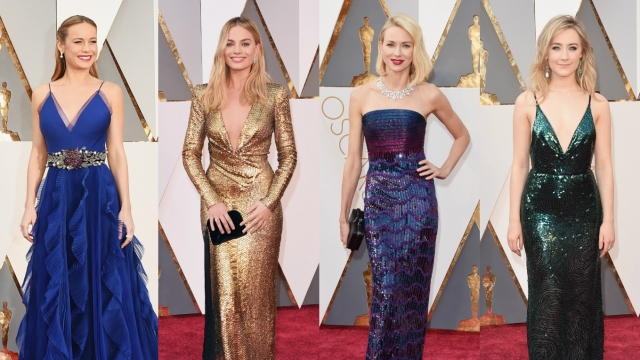 The biggest night in entertainment is finally here, and this year's Oscar attendees dressed up to shut down the red carpet.

Alicia Vikander was an early arrival but looked like the belle of the ball in a stunning pale yellow Louis Vuitton gown.

Brie Larson absolutely stunned in a royal blue Gucci gown. She kept her accessories simple with pearl-drop earrings and a studded hair clip.

Naomi Watts wore a strapless purple and blue sequined Armani gown that had a mermaid-like pattern.

Jennifer Garner chose a simply stunning black Atelier Versace with sparkling accents for her first award show appearance since announcing her divorce from Ben Affleck. We think it's safe to say single looks good on her.

And probably our favorite look of the night goes to the Irish beauty Saoirse Ronan — who's beachy blonde hair should win an Oscar. The "Brooklyn" star stunned in an emerald green Calvin Klein Collection gown.