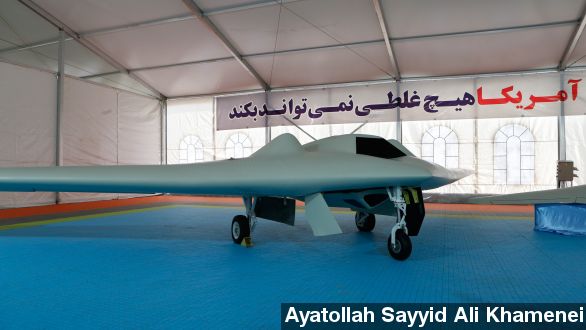 SMS
The Odd Timing Of Iran's Drone Flight Announcement
By Jake Godin
By Jake Godin
November 11, 2014
Iran announced the first successful flight of a drone just as talks between Tehran and Western leaders over the country's nuclear program ramped up.
SHOW TRANSCRIPT

In what may be some rather poor timing, Iran announced the first successful flight of a drone it copied from a downed U.S. reconnaissance drone … right in the middle of delicate talks over its nuclear program.

This video from Press TV shows the original RQ-170 Sentinel in Iranian hands after the military says it downed the aircraft almost fully intact three years ago.

Iranian media had reported the replica was completed by the Iranian Revolutionary Guard Corps earlier this year, but there was no evidence of the drone flying.

While this latest report suggests Tehran managed to get it airborne, a writer at The Aviationist remains doubtful, saying drone technology is just too far out of reach for Iran at the moment.

Still, Iran's Fars News Agency reports the reverse engineered drone has been armed with bombs, "enabling it to operate as a bomber aircraft against the US warships in any possible showdown between the two countries."

Regardless of whether the drone can fly, the announcement comes at an interesting time.

The meeting, held in Oman, ended with no signs they were any closer to reaching a deal. Still, Iranian officials said they were optimistic about reaching one before the Nov. 24 deadline.

Nuclear negotiations between Iran and Western leaders have been ongoing since 2006 and revolve around giving Iran the ability to use enough nuclear power for energy, but not enough for creating any nuclear weapons.

While a four-month extension on talks was made in July, The White House says there is no plan for an additional extension if talks fail to produce a deal by the end of this month.

This video includes images from Getty Images and an image from the U.S. Department of State.