The Oceans' Plastic Problem Gets 8M Tons Worse Every Year 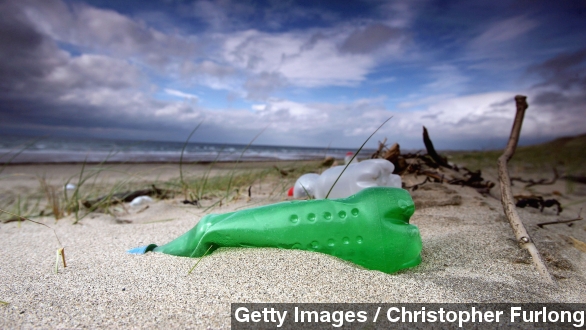 Plastic in the oceans is a big problem — one getting worse by an average of 8 million tons a year, according to new research.

A team of environmentalists and engineers broke down waste data in 192 countries and found they send anywhere from 4.8 million to 12.7 million metric tons of plastic into the oceans each year.

A country's contribution, then, is to a certain degree dependent on how developed its waste processing is.

"The main culprits: Asia and Africa, where economies are growing but garbage collection and recycling lag way behind. The plastic is washed or blown out of landfill sites, or simply littered on beaches," said the CBC's Margo McDiarmid.

The same durable qualities that make plastic useful to us humans make it a big problem for the oceans, or rather, make it a lot of very, very small problems.

The NOAA's Dianna Parker explains: "Plastics never really go away. They just break down over and over and over again until they become smaller and smaller from sunlight and other environmental factors [like] waves, big storms, those kind of things."

The New York Times reports: "Research into the marine food chain suggests that fish and other organisms consume the bite-size particles and may reabsorb the toxic substances. Those fish are eaten by other fish, and by people."

Researchers maintain the best way to deal with these fine particles is to not let them get to that point in the first place. Filtering the plastic dust out of the oceans would filter out a lot of marine life, too. Management has to happen on land first. (Video via Midway Journey)

And the sooner, the better. The researchers' data suggests the oceans' trash problem will continue. Thanks to ongoing development, "We will not reach a global 'peak waste' before 2100."

The team has published its findings in the journal Science.

This video includes images from Getty Images, NASA and Kevin Krejci / CC BY 2.0.