The Obamas And Prince Harry Fake-Feud Over Invictus Games 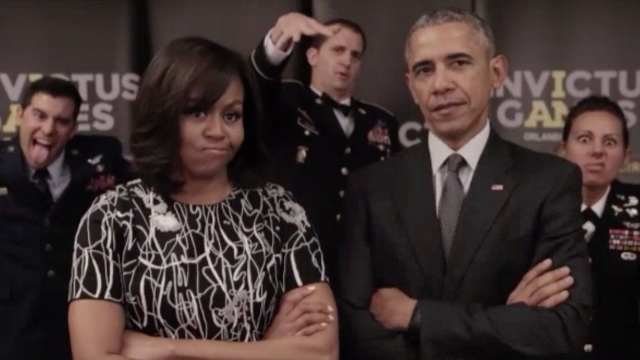 The U.K. and the U.S. are allies, sure, but that doesn't mean their leaders can't engage in a little friendly competition.

"Hey, Prince Harry, remember when you told us to bring it at the Invictus Games?" first lady Michelle Obama said. "Careful what you wish for," President Barack Obama said. "Boom," someone in the background of the video said.

The first lady posted the video to Twitter and asked Kensington Palace, "Are you ready for @InvictusOrlando? Game on."

The Invictus Games is an international competition for wounded and ill veterans as well as active-duty service people. Prince Harry founded it after he saw the U.S.'s Warrior Games, another adaptive sports competition.

For the 2016 Invictus Games, Prince Harry isn't about to be shown up by the Obamas. Luckily, his grandma has his back.

"Oh, message, from Michelle. How very amusing. Would you like to watch it together?" Prince Harry said. "Oh, really, please," Queen Elizabeth said. "Boom," Prince Harry.

The Invictus Games will take place in Orlando, Florida, this year starting May 8.

This video includes an image from Getty Images and clips from CBS and Invictus Games Orlando 2016 & MASI.