The NFL Draft: An Origin Story 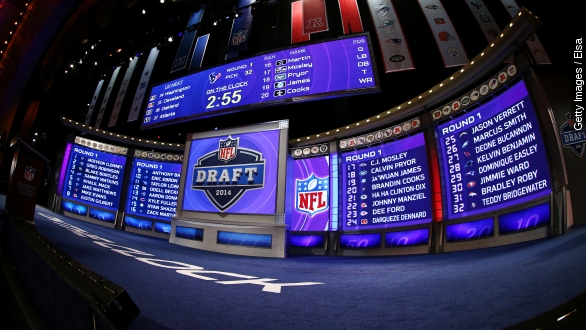 SMS
The NFL Draft: An Origin Story
By Hannah Shaw
By Hannah Shaw
April 30, 2015
From a "neat experiment" to a multiday spectacle, here's a brief history of how the NFL draft began.
SHOW TRANSCRIPT

It’s that time of year again. That time when fans of all 32 teams in the NFL think it might actually be their year.

It’s that glimmer of hope that draws millions of fans to the NFL draft -- which begins tonight, in primetime, on both ESPN and NFL Network.

Last year, 12.4 million people tuned in to see commissioner Roger Goddell smile with players who just became millionaires on the opening night of the draft. That’s a 262 percent increase in NFL draft ratings over a 13-year span. 262 PERCENT!

And this year’s event is expected to be even bigger. The NFL moved the event to Chicago, and created what they are calling a three-day family fun fan festival — complete with daily football activities, player appearances and live music.

Oh, and this is all in addition to what people are actually supposed to be there for. You know, the draft?

So how in the world did a reading of names become the spectacle it is today?

In 1980, a channel you may have heard of — ESPN approached then commissioner Pete Rozell and asked if they could broadcast the proceedings. Rozell said he didn't mind, but he was rather curious on who would be interested in watching the draft...

And so, the draft first aired on television in 1980. The league moved the proceedings out of a hotel ballroom in 1995, and into more well-known places like Madison Square Garden and Radio City Music Hall.

In 2010, the draft expanded from two days to three, and put the first round in primetime, and well, the rest is history.