The News Isn't Calling Trump Out On His Iraq War Fib 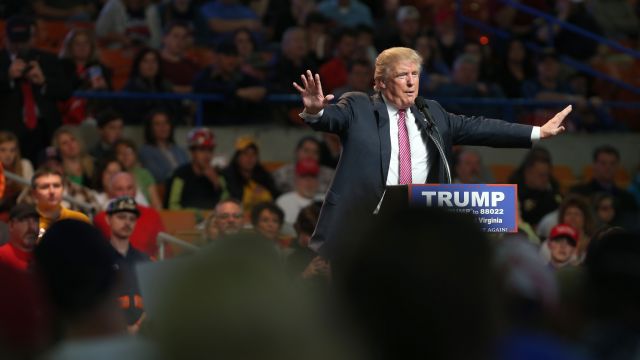 SMS
The News Isn't Calling Trump Out On His Iraq War Fib
By Jake Godin
By Jake Godin
May 6, 2016
Reporters keep letting Donald Trump say during interviews that he never supported the Iraq War without bringing up that one time he did support it.
SHOW TRANSCRIPT

"I was against the war in Iraq. I said you don't go in. You're going to destabilize the Middle East. I was so strong against going into Iraq."

"Are you for invading Iraq?" asked Howard Stern.

"Yeah, I guess so. You know, I wish the first time it was done correctly."

And news anchors don't really call him out on it.

"Just like I said, I don't want to go into Iraq, and I said that a long time ago. I wasn't the war hawk. There were a lot of other people."

"I was always against the war in Iraq. I said it's going to totally destabilize the Middle East, and that's what it's done. It's a disaster."

"You know, I know a lot of people like to say he actually was sort of for the Iraq War — I was against the Iraq War."

"I was against the war in Iraq. I said you don't go in. You're gonna destabilize the Middle East. I was so strong against going into Iraq."

"I was against the war in Iraq right from the beginning, but you shouldn't have got out the way they got out. When you look at Obama ..."

"You know, as a civilian I was totally against it, and should have never. One of the worst decisions in the history of our country by the way, perhaps the worst."

Some are even defending the claim themselves.

"He's more against the Iraq War than even Bernie Sanders is. He even said that the Bush administration lied about it. My goodness, he's going to be kinda' hard to fight."

"Trump spent a lot of time saying that he was one of the first people against the Iraq War, and then they went back to the tapes and it turned out he was for the Iraq War."

It’s pretty rare that someone calls Trump on it.

"Let me just tell you, yeah, I'm talking to Howard Stern weeks before, first time anyone ever asked me about the war ... and I said very weakly, 'Well, bab bab bab, yeah, I guess.'"