The Newest Feud In Hip-Hop: B.o.B Vs. Neil deGrasse Tyson 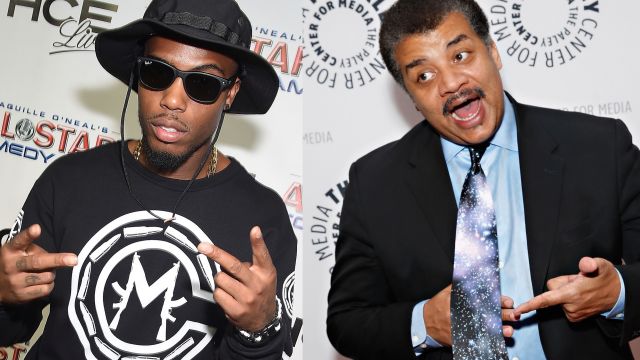 So we have 2Pac and Biggie, Drake and Meek Mill but now you can add B.o.B and Neil deGrasse Tyson to the list of the greatest hip-hop beefs of our time. (Videos via Warner Bros. Records / Meek Mill, Warner Music Group / The Notorious B.I.G.)

Yep, the scientist who ruins all your favorite space movies and the rapper you used to like are caught in a war of words after B.o.B started tweeting supposed evidence that the Earth is actually flat.

After Tyson debunked a few points the rapper tweeted out, B.o.B responded with a diss track titled "Flatline," saying Tyson is being paid to promote his round-Earth agenda. (Video via Warner Music Group / B.o.B.)

"Neil Tyson need to loosen up his vest. They probably write that man one hell of a check," B.o.B raps.

But Tyson isn't one to back down from a challenge. So the astrophysicist enlisted some help from a friend who can rap, sampled Drake’s diss track "Back to back" and dropped a response called "Flat to Fact." (Video via TBS / "Conan")

"I ain’t waiting for days, Bob. I’m right here. I got science in my corner, and there’s nothing to fear. I’m not sure what it was that really made you think that you could disrespect the Tyson, and your ship won’t sink," Tyson's nephew raps.

OK, so round Earth versus flat Earth probably isn't going to be the new East Coast versus West Coast hip-hop feud.

B.o.B changed the subject on Twitter, and Tyson pointed out that being "regressed in your reasoning doesn’t mean we all can’t still like your music." But hey, it was fun while it lasted.