The New Keurig Kold Might Be Too Little Too Late 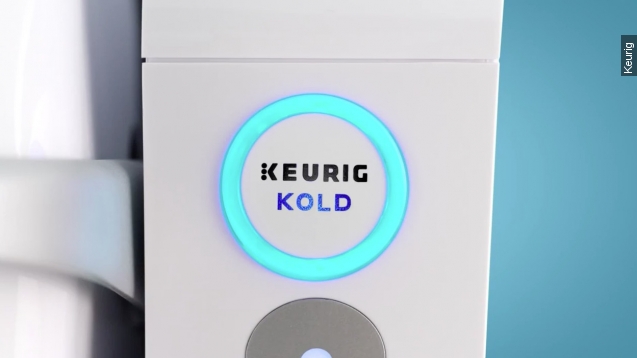 SMS
The New Keurig Kold Might Be Too Little Too Late

By Jamal Andress
September 29, 2015
The new Keurig Kold can make carbonated beverages, but the soft-drink market is declining. The machine might not revive the company's stock.
SHOW TRANSCRIPT

Last year in February, Keurig announced a $1.25 billion partnership with the Coca-Cola Co. Now, more than a year and a half later, consumers are finally seeing the results of the massive deal.

Keurig Kold is a $370 soda-maker that Keurig is hoping can turn the company's fortunes (and stock price) around is now available online. And because of the partnership with Coke, Keurig Kold features some of your favorites: Sprite, Fanta, Canada Dry, Classic Coke and others.

Soda Stream, Keurig's main competition in the homemade soda market, requires a "carbonator" to work, and those carbonators have to be periodically replaced.

But where the Kold doesn't charge for carbonators, it makes up for with its pod price. After paying $370 up front for the machine, the four-pack of pods costs between $4 and $5 and produces roughly 32 ounces of soda.

But all of this could be too little too late for the coffee-maker company.

For one, Keurig Green Mountain's stock price has been relatively unaffected by the news, hovering around $53 per share Tuesday morning. And over the course of the year, Keurig's stock price has fallen about 60 percent.

Secondly, Keurig is entering a business on the decline. While Americans are spending record amounts of money on coffee, and coffee consumption around the world continues to rise, soda has declined for 10 years straight.

According to Beverage Digest, U.S. per-capita consumption of carbonated soft drinks fell to its lowest level since 1986 at 674, 8-ounce servings per person per year.

That being said, at the height of Keurig's powers, it was selling upwards of $330 million in machines and $800 million in K-Cups annually. So, Keurig Kold has a long way to go to beat those numbers.