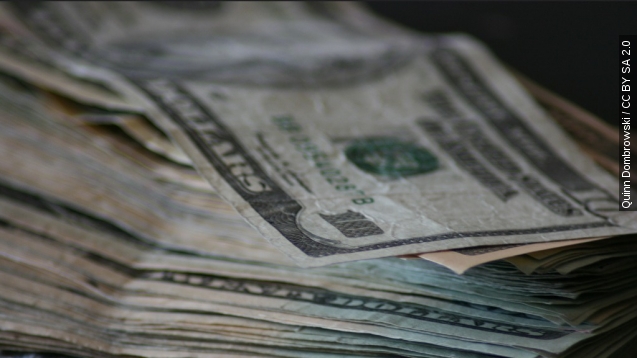 SMS
The New Face Of The $10 Bill: A Woman
By Katherine Biek
By Katherine Biek
June 18, 2015
The U.S. Treasury Department is putting a woman on the redesigned $10 bill that'll be put into circulation in 2020.
SHOW TRANSCRIPT

For the first time in more than a century, the U.S. Treasury Department announced Wednesday it will feature a woman on its paper currency.

A redesign process is already underway to replace the portrait of Alexander Hamilton on the American $10 bill.

"Democracy is the theme for the next redesign series of U.S. notes. Images that capture this theme will be featured on the new $10 bill and future bills," Treasury Secretary Jack Lew said.

The announcement comes on the heels of a campaign from Women on 20s. Since January, the group has been working hard to encourage President Obama to force the U.S. Treasury to redesign the $20 bill with a woman.

The group even held a vote to determine which woman should be chosen and, after more than 600,000 people weighed in, Harriet Tubman was announced as the winner.

The Treasury says the $10 bill is getting the redesign instead of the $20 because it was already scheduled for one due to its potential to be targeted by counterfeiters.

As for which woman will receive this honor — it won't necessarily be Tubman. The Treasury has already created the hashtag #TheNew10 so people can give their opinions on social media.

The only requirement is that the woman chosen is no longer living — sorry Beyonce.

This redesign doesn't exactly mean Hamilton is going away, though.

The Washington Post says Lew told reporters the Treasury is considering putting Hamilton on half of the new redesigned bills or even putting him on one side and the chosen woman on the other.

Even if the Treasury chooses to do away with Hamilton, CNN reports there are plenty of $10 bills in circulation right now. 1.9 billion to be exact.

We won't be seeing the new $10 bill until 2020. The Treasury chose that year specifically because it'll be the 100th anniversary of the 19th Amendment, which was ratified in 1920, giving women the right to vote.