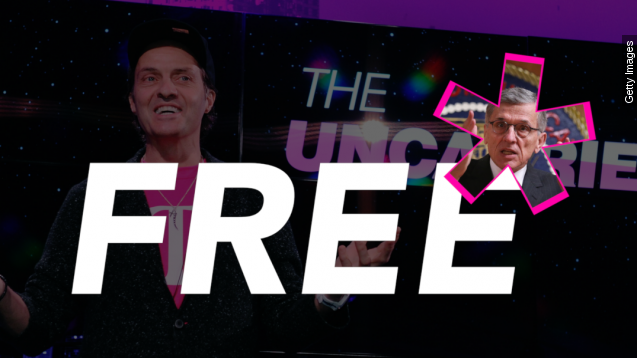 SMS
The Net Neutrality Implications Of Free T-Mobile Streaming
By Evan Thomas
By Evan Thomas
October 30, 2015
What's great for consumers would only be great for content partners that can get on T-Mobile's lists. But the little streamers might suffer.
SHOW TRANSCRIPT

If you believe the leaks, T-Mobile is preparing to offer free streaming video from sources such as Netflix and HBO.

They would join major music services that already partner with T-Mobile for free streaming under its Music Freedom program. (Video via T-Mobile)

But before you switch over to T-Mobile, consider any such announcement will probably attract the attention of the FCC.

Because this rumor might not go against the letter of bright-line net neutrality law, but it does go against its spirit. (Video via C-SPAN)

If a video service works like its Music Freedom program does, T-Mobile would just not count content from certain sources against customer data limits. There's no entry in the FCC rulebooks to prohibit that. (Videos via Spotify, Google)

But this is a process called "zero rating." Net neutrality proponents — and the FCC — say an ISP should not grant specific content preferential treatment.

It only benefits those businesses that can get onto T-Mobile's lists. The little guys find it harder to compete. (Video via Netflix)

It's not clear what an arrangement between T-Mobile and its partners might look like, or who would pay for what. (Video via HBO)

But we can assume any services that don't meet T-Mobile's metric for partnership — whether that be entry fees, or market share requirements or whatever — wouldn't get to play. (Video via T-Mobile)

The idea is less concerning if T-Mobile plans to eventually make all data on its network free. But it's not clear if that's technically or economically feasible for the carrier.

Despite its recent success, it's tiny compared to Verizon and AT&T, and it hasn't detailed any such plans. (Video via Verizon)

T-Mobile CEO John Legere isn't offering any hints. To the guesses of his company's announcement, he tells his Twitter followers to "keep trying."

Details will come Nov. 10 in Los Angeles. (Video via T-Mobile)